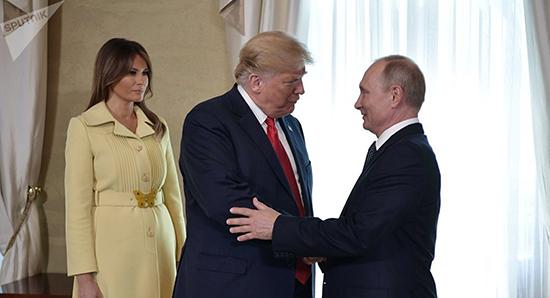 The undivided attention that the Finnish press dedicated to the First Lady of the US Melania Trump’s outfits on the margins of the Trump-Putin summit in Helsinki has sparked outrage among journalists, politicians and the learned circles alike as “tasteless and old-fashioned.”

Both the evening press and ostensibly respectable newspapers such as the capital city’s Helsingin Sanomat or national broadcaster Yle ran a number of pieces on Melania Trump’s dress during her appearance in Finland.

First, the Finnish media were worried that Melania Trump was badly briefed about the weather, because she had a long-sleeved jacket on when she arrived in Helsinki, where the temperature was hovering around 30 degrees amid a heat wave.

Then the focus of attention shifted toward the butterfly Melania Trump wore on her waist. The main question then became whether it could be a subtle reference to Finland’s nature.

Furthermore, the Finnish media carefully investigated what brands the First Lady of the US was wearing during her meeting with her Finnish counterpart Jenni Haukio. This unsolicited attention triggered outrage among the journalistic, political and scientific milieus alike.

Journalist Reetta Rönkä expressed her disappointment over the part that the two women were given in the news broadcast.

“The role of women is completely clear, now that even [national broadcaster] Yle mentioned the ‘butterfly pattern,'” Rönkä tweeted.

Emmi Paajanen, the deputy chair of the Center youth federation voiced her indignation over Helsingin Sanomat’s article on the meeting at the presidential residence of Mäntyniemi.

“When the presidents’ spouses meet to talk, the biggest newspaper in Finland chooses to analyze their clothes. Not a word about, for example, what Haukio and Trump have talked about. Pull yourself together,” Paajanen tweeted.

​Mira Karjalainenm, a lecturer and a researcher in gender studies at the University of Helsinki, argued that the coverage “smelled old-fashioned women’s magazines long way.”

She lamented the fact that even respectable media joined the tabloids in this trend of “tasteless” journalism.

“This sort of clickbait journalism is tragic. It’s a pity to see Helsingin Sanomat and Yle join this race, even though I understand the logic. They need readers,” Karjalainen told the daily newspaper Hufvudstadsbladet.

​Melania Trump’s clothing has become the focus of international attention before. Last month, her choice to wear a coat with the text “I really don’t care. Do U?” during her visit to a migrant children’s camp at the US-Mexico border was largely condemned as distasteful.