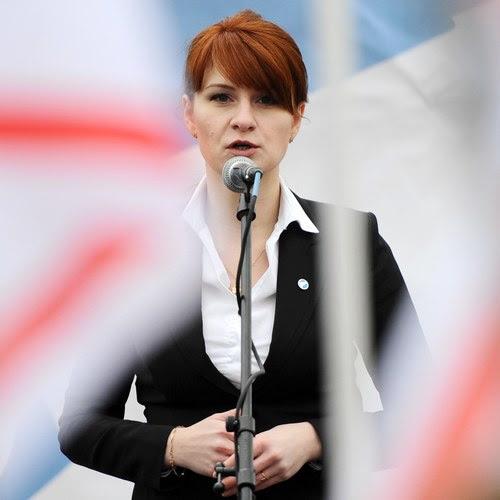 Criminal charges open new front in bid to counter Russian disruption and suggest American associates of Butina, 29, may be under threat

It was July 2015, and Maria Butina wanted to know what Trump, then a month into his unlikely campaign for the White House, planned to do about US relations with her country. Trump had good news.

“I believe I would get along very nicely with Putin,” he said.

Butina, then 27, was asked on the sidelines of the event why she had travelled all the way to Nevada for a gathering of libertarians and conservatives. “I would like to know more, and to bring this knowledge to Russia,” she said casually. “I hope it will be useful for my country.”

According to US prosecutors, Butina’s patriotic curiosity had by then developed into the beginnings of a criminal conspiracy.

Butina was arrested last weekend and appeared in court in Washington on Monday, charged with operating as a secret agent for the Kremlin. She is accused of working to infiltrate the National Rifle Association (NRA) in an attempt to influence the Republican party and, ultimately, the US government.

An FBI agent who investigated Butina said in a court filing she tried to develop secret back channels with American politicians that could “penetrate the US national decision-making apparatus to advance the agenda of the Russian federation”.

Butina denies any wrongdoing. Her attorney, Robert Driscoll, said she was a legitimate college graduate and aspiring businesswoman who happened to be Russian. She “intends to defend her rights vigorously and looks forward to clearing her name”, he said.

The charges open a new front in the justice department’s effort to counter Russian disruption of US politics, and signal that American associates of Butina may be seriously imperilled. They also threaten to conclude Butina’s short adventure in Washington with up to five years in a federal prison.

As she worked her way into some of American conservatism’s most rarefied circles, Butina had a compelling and simple pitch: she was building Russia’s equivalent of the NRA.

In the grey-haired, male-dominated world of conservative conferences, Butina stood out. She was young, tall and flirtatious, according to two gun rights activists who knew her. In 2014, she was the subject of a flattering profile in Russian GQ, accompanied by a photoshoot of her posing with pistols in Dolce & Gabbana underwear.

Butina has said she was raised in Siberia, where her father introduced her to guns and taught her to shoot. After college, she said, she founded a chain of furniture stores. Then she moved to Moscow, where she said she ran an advertising company. In a 2012 profile, she described founding a group called The Right to Bear Arms some time around 2011. She also took the American journalist profiling her to shoot guns “at a former KGB range”.

Butina clearly knew how to handle firearms: she was comfortable and competent around guns. But other aspects of her résumé did not seem to add up, one activist said. When asked for basic official documents for her Russian gun rights group, the activist said, Butina could not produce any.

Alan Gottlieb and Julianne Versnel, husband-and-wife gun rights activists, said they had an intimate dinner with Butina and Alexander Torshin, her longtime mentor, during a Right to Bear Arms conference in Moscow in 2013. Torshin, a senior official at Russia’s central bank, is now accused by US prosecutors of directing Butina’s operations.

Gottlieb, founder of the Washington-state based Second Amendment Foundation, said Butina always seemed laser-focused on gun policy. Still, she was an unusual character: assertive, even aggressive and determined to make herself the centre of attention.

“She did not behave in what I considered an entirely professional manner,” Versnel said. “She had an extra button or three unbuttoned.”

Her husband added: “She knew how to use her youth and beauty to make sure that she was engaged in conversation.”

Butina began cultivating American contacts. In 2013, John Bolton, now Trump’s national security adviser, appeared in a Russian gun rights video that Right to Bear Arms used for pro-gun lobbying in Russia. Bolton was reportedly asked to appear in the video by David Keene, a recent president of the NRA, who had become acquainted with Torshin.

In April 2014, Butina flew to Indianapolis for the NRA convention. She posted photographs to the Russian social network VK showing that she mixed with Wayne LaPierre, the NRA’s pugnacious vice-president, along with heavyweight Republicans including Bobby Jindal, then governor of Louisiana, and Rick Santorum, a former US senator and presidential candidate.

That September, Butina invited Paul Erickson, a conservative political operative and veteran NRA member based in South Dakota, to address her gun rights group in Moscow. Six months later, according to US officials, she emailed an American political operative who appears to be Erickson to set out what she called project “Diplomacy”. Erickson did not respond to messages this week.

The subject line of Butina’s email, sent on 24 March 2015, appeared to liken her to a notorious KGB propagandist during the cold war. In the text, she declared that the Republican party, in the prosecutors’ words, “would likely obtain control over the US government after the 2016 elections”.

The disclosure this week raised an obvious question: what, at a time when most national opinion polling indicated an advantage for Hillary Clinton over her potential Republican rivals, had convinced Butina that the GOP would be triumphant in an election still 20 months away?

Saying that she wanted to build more constructive relations with the traditionally hawkish Republicans, Butina noted the NRA’s “central place and influence” in the party. She said she needed a $125,000 budget to fund her participation in GOP conferences. The American political operative provided her with a list of “important contacts” to meet.

A few weeks later, Butina was back in the US for the NRA’s 2015 convention. Held in Nashville, Tennessee, it again gave her access to the most in-demand figures in the conservative movement. She and Torshin chatted with Scott Walker, the governor of Wisconsin, who posed for a photograph with her and spoke a few phrases in Russian. In July, Butina attended the launch of Walker’s presidential campaign.

The Kremlin seems to have been interested. Court filings said Butina wrote Torshin a memo about a political campaign event that detailed her “private meeting” with the same candidate at the NRA convention. Walker was not identified by name. Then came Butina’s encounter with Trump at the Freedom Fest event in Las Vegas.

Late that year, Butina’s gun rights group paid to fly NRA allies to Moscow for a visit that included lavish dinners and a meeting with Dmitry Rogozin, Russia’s deputy prime minister. Her guests included Erickson, Keene and David Clarke, the former sheriff of Milwaukee, who would go on to support Trump’s presidential campaign.

Pete Brownell, a gun company chief executive who also took part in the 2015 Moscow trip, became NRA president in 2017. In May this year, his tenure ended abruptly and earlier than expected. Representatives did not respond to questions about whether his departure was connected to the Russia trip.

The NRA and Clarke did not respond to requests for comment. A person who answered the phone at a number listed under Keene’s name said on Monday he was “out fishing” and was not expected back until the end of the month.

As the 2016 campaign intensified, and the likelihood of Trump’s Republican primary victory became clear, Butina began honing her activities and trying to gain access to the candidate and his circle, according to US officials.

During that election year, she obtained a student visa and enrolled in an international relations graduate program at American University in Washington. But her networking continued.

Butina told a second American associate, also unidentified in the charging documents, that a Kremlin official had endorsed her efforts to establish a back channel to US politicians. She wrote: “All we needed is <<yes>> from Putin’s side. The rest is easier.”

Court filings describe extensive efforts by Butina and Torshin over the following months to arrange a series of “friendship and dialogue dinners” in Washington and New York. They reportedly used American go-betweens to make an apparently unsuccessful approach to senior members of Trump’s campaign with a “backdoor overture” on behalf of Vladimir Putin’s government.

They tried to get access to Trump himself in May 2016, but had to make do with his son. The Trump Organization confirmed that Donald Jr met Torshin during the NRA convention in Louisville, Kentucky, but tried to downplay the significance of their discussion.

Alan Futerfas, an attorney for the Trump company, told CBS the two men were introduced and “made small talk for a few minutes” before dining separately. Futerfas has also said the discussion was “all gun-related”. The New York Times reported on Monday that Butina was present at this meeting and that congressional investigators have obtained a photograph of the three together.

According to the FBI, when guns didn’t bring her to Trump, Butina tried again with God. An investigator described in court filings a series of contacts between Butina and an organiser for the National Prayer Breakfast in Washington. Butina and Torshin attended in February 2016.

(Torshin and Butina came even closer to a meeting with the president at the following year’s Prayer Breakfast. Shortly before the scheduled encounter, a White House aide flagged Torshin’s “baggage” and cancelled the meet and greets, Yahoo News reported.)

By 4 October 2016, with just a month to go before polling day, Butina’s first American associate – apparently Erickson – emailed a contact to say that he had “been involved in securing a VERY private line of communication between the Kremlin” and Republican leaders.

The next day, Butina and Torshin exchanged a series of cryptic Twitter messages reflecting on their efforts, according to prosecutors. When Torshin asked about the status of the “Russia-USA friendship society”, Butina replied “we are currently ‘underground’ both here and there” and signalled a need to avoid publicity.

“Time will tell,” Butina wrote. “We made our bet.”