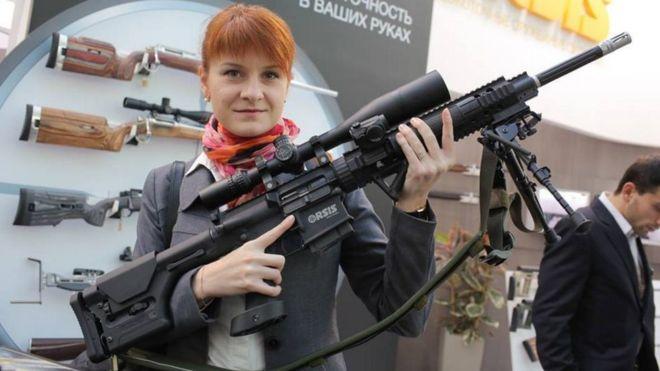 The 29-year-old also offered someone sex in return for a position within an activist group, according to a new court filing

The Russian woman charged with spying in the US was in contact with suspected Russian intelligence officers and a billionaire oligarch linked to the Kremlin, US authorities said on Wednesday.

Prosecutors said Maria Butina kept contact details for “individuals identified as employees of the Russian FSB”, and investigators searching her belongings found a handwritten note that asked: “How to respond to FSB offer of employment?”

Butina, 29, also entered into in a sham relationship with a American political operative to help her activities, and offered someone else sex in return for a position within an activist group, according to a new court filing.

The new information was presented by prosecutors as they asked a judge in Washington to keep Butina detained in advance of her trial for conspiracy and illegally operating as a foreign agent inside the US. She is accused of working to infiltrate the National Rifle Association (NRA) and Republican party.

Butina denies all the allegations against her. Asked to respond to the new allegations, her attorney Robert Driscoll said in an email: “I’ll comment in court.” A hearing in her case was scheduled for Wednesday afternoon in Washington.

Jessie Liu, the US attorney for Washington DC, said Butina was watched by US agents sharing a private meal with a Russian diplomat who is suspected of actually being an intelligence officer.

Liu said electronic messages reviewed by investigators contained references to a Russian billionaire with “deep ties to the Russian presidential administration”, who was described as Butina’s “funder”. Butina was also in contact with a second wealthy Russian businessman.

The court filing said Butina had packed her possessions and was preparing to move out of her apartment in the capital when she was arrested last Sunday, and that she had “every reason” to flee the country if released.

“The defendant is a foreign agent who loyally acted on behalf of the Russian government,” said Liu.

Butina faces up to 10 years in prison if convicted of the charges.

The new filing said Butina was in a “personal relationship” with the unidentified American political operative who was previously said to have assisted her attempts to influence US politics, and that this person is 56 years old.

The American operative matches descriptions of Paul Erickson, a 56-year-old veteran of conservative politics and pro-gun rights activism. Erickson did not respond to several messages from the Guardian this week.

Prosecutors said Butina appeared to treat the relationship as “simply a necessary aspect of her activities” and privately “expressed disdain” for having to live with him and that “on at least one occasion, Butina offered an individual other than [the operative] sex in exchange for a position within a special interest organization.”

Prosecutors said on Wednesday that the American operative was “instrumental in aiding her covert influence operation, despite knowing its connections to” a senior Russian government official who was directing Butina.

Wednesday’s filing said Butina and the US operative were followed by agents to a U-Haul truck rental shop last Saturday and seen buying moving boxes. Two days earlier, the filing said, they had been seen visiting a bank in Washington and sending a wire transfer of $3,500 to an account in Russia.

Other new messages published by prosecutors showed that the senior Russian official accused of directing Butina likened her to Anna Chapman, a notorious undercover Russian agent who was arrested in the US in 2010 and deported.

“You have upstaged Anna Chapman. She poses with toy pistols, while you are being published with real ones,” said the official, who appears to be Alexander Torshin, a senior Russian state banker known publicly as Butina’s mentor.

Prosecutors said Butina sent Torshin a photograph of her near the US Capitol on the day of Donald Trump’s inauguration in January last year. Torshin responded: “You’re a daredevil girl! What can I say!” Butina said: “Good teachers!”

Butina’s attorney has said she was a legitimate Russian graduate student and recently completed a master’s program in international relations at a university in Washington.

Prosecutors said on Wednesday that Butina’s student visa was obtained using deception, and that she routinely used the American operative who appears to be Erickson to “help complete her academic assignments” for her.

“In other words, although she attended classes and completed coursework with outside help, attending American University was Butina’s cover while she continued to work on behalf of the Russian Official,” the court filing said.