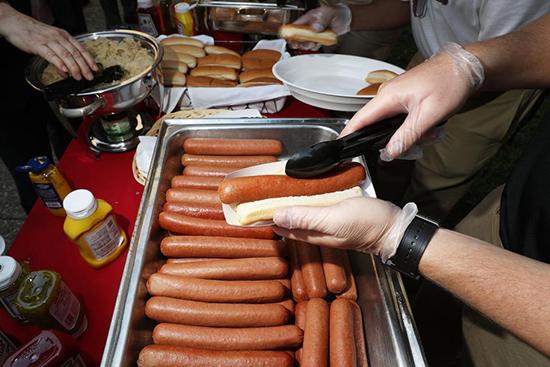 The hot dog has become a staple of the American food scene—and on July 18 the country collectively celebrates the medley of meats in what is known as National Hot Dog Day. However, all good things come with a price and hot dogs are no different. The common statistic thrown around in conversation is that a person should only consume two hot dogs a year due to the health risks they pose. But is that fact or fiction?

Even those with the most resolute confirmation bias would be hard-pressed to find a professional who would be on board with a hot dog-based diet; however, the life of a hot dog lover is not as bleak as only having two a year.

Katie Jordanhazy, a registered dietitian with Novant Health in Winston-Salem, North Carolina, told Newsweek that despite people loving to put specific numbers on things “there really is no exact number of hot dogs to eat per year.”

Consuming any processed meat, including deli meat and bacon, on a regular basis can increase a person’s chance for stomach and colorectal cancer, although, Jordanhazy noted that the catch is that there’s no “foundation on what regularly means.”

“American Institute for Cancer Research says one hot dog a day can raise your risk 21 percent,” the dietician told Newsweek. On average, an American consumes 70 hot dogs per year, according to the National Hot Dog and Sausage Council.

People prepare their hot dogs during the American Meat Institute’s annual Hot Dog Lunch in the Rayburn courtyard on July 19, 2017 in Washington, DC. There’s no rule of thumb for hot dog consumption and a registered dietitian told Newsweek everyone should limit consumption to what’s doable for them. Joe Raedle/Getty Images

While most people aren’t going to consume 365 hot dogs a year, that doesn’t mean there aren’t steps a person can take to mitigate the risk of cancer caused by nitrates found in hot dogs regardless of consumption levels. Jordanhazy admitted to having never made a hot dog at home but credited being able to use fresh meat as a better alternative because of the decreased need for a high level of preservatives containing nitrates.

If making a hot dog at home doesn’t sound like a great use of your time, the dietician called veggie dogs and so-called healthy hot dogs a better alternative to meat but opting for chicken, fish, or even a lean burger is better still.

If you’re determined to have a hot dog that tastes like a hot dog that you can pick up at the store, Jordanhazy sided with the all-beef kind because they’ll be “a little bit leaner” with fewer fillers and “at least you know what you’re getting in them.”

Along with the risk of cancer, the level of sodium in a hot dog—equal to about 20 percent of a person’s recommended daily sodium intake—can cause problems such as hypertension. Ultimately, when it comes to hot dog consumption, Jordanhazy said everyone should limit their intake to whatever is “doable” for them.

“Mostly what I tell people is as little as possible,” the dietician said. “If they’re currently having two hot dogs per day, I would be perfectly happy with them going down to one hot dog per day.”

If you’re eating healthy 90 percent of the time, Jordanhazy said she sees no problem with a little indulgence on the holiest of all holy hot dog days because she doesn’t think “the risk outweighs having the hot dog if you really want it.”