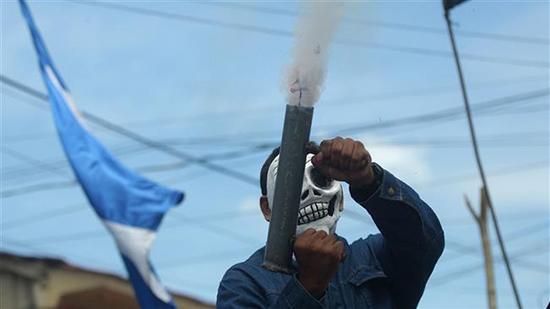 Nicaraguan security forces have launched an operation to clear barricades set-up by opposition protesters near the city of Masaya, with reports of clashes between the government and anti-government forces.

Police officers and paramilitary units moved on Tuesday to seal off all roads leading to Masaya’s flashpoint suburb of Monimbo, from which sporadic gunfire was reported, with videos posted on social media showing anti-government rebels firing back at security forces with homemade mortars.

AFP said at least two people had been killed, but that figure could not be independently verified.

Some reports said government forces opened fire on a group of journalist seeking to reach Monimbo, which is a stronghold of opposition forces.

Masaya’s police chief Ramon Avellan announced on Tuesday that he had orders from the Central American nation’s President Daniel Ortega to remove roadblocks used by the rebels to protect themselves in clashes with police and pro-government groups in Monimbo.

“We’re going to fulfill that order, at whatever cost,” Avellan said in a press briefing. “Masaya is ours.”

The clampdown came just ahead of the 39th anniversary on Thursday of the Sandinista revolution in 1979 that ousted US-backed dictator Anastasio Somoza.

It also came a day after UN Secretary-General Antonio Guterres accused government-linked groups in Nicaragua of using “lethal” force against opposition protesters, urging an end to the deadly unrest in the country.

“It’s evident that there is a shocking number of deaths and a lethal use of force by entities tied to the state, that is unacceptable,” Guterres said on Monday.

Also on Monday, hundreds of people staged a protest rally in Managua demanding justice for the victims of the recent crackdown on protests against the government.

At least 275 people have died since protests broke out in the country in April after the government attempted to cut pension benefits, according to a report by the Managua-based Nicaraguan Center for Human Rights (CENIDH).

Also on Tuesday, Nicaragua’s Vice-President Rosario Murillo, who is Ortega’ wife, described the protesters as a “hate-filled minority” and insisted that authorities were working to reestablish “security and peace” for residents.

The UN High Commissioner for Human Rights (OHCHR) also alleged on Tuesday that Nicaraguan police and authorities have killed and imprisoned people without due process and committed torture.

“A wide range of human rights violations are being committed including extrajudicial killings, torture, arbitrary detentions, and denying people the right to freedom of expression,” OHCHR spokesman Rupert Colville said at a news briefing.

Security forces have been among the fatalities.

Meanwhile, Nicaragua’s Minister for National Policies Paul Oquist said in an AFP interview on Tuesday that an attempted “coup” had been defeated.

“That is very good news because what it leaves then is dialog, because the coup plotters did not want dialog,” he said.

The crackdown on opposition protesters in Nicaragua has drawn international condemnation for Ortega, who faces his biggest test in office since he returned to power in 2007 after being voted out of office in 1990.

Nicaraguan opposition political parties have called on Ortega to leave office and hold early elections. He has refused to do either so far.

‘Together we stand by Israel’s side,’ says Austria’s Kurz & flies Israeli flag. What about dead Gaza children? Twitter users ask