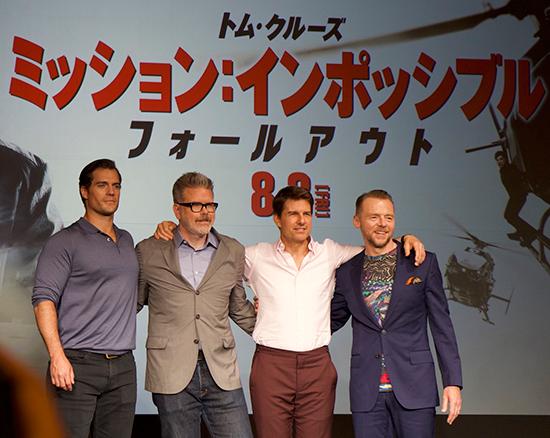 “Good morning, Mr Hunt. Your mission, should you choose to accept it, involves jumping off an aircraft 25,000 feet above ground, for a total of 106 times, with a broken ankle and a time limit of 60 seconds.”

That’s just some of what audiences can expect in the action-packed “Mission: Impossible – Fallout,” the sixth installment of the series. Tom Cruise, 56, reprises his role of Ethan Hunt, the undercover IMF agent employed by the U.S. government.  This time, the IMF team is pursued by assassins and former allies as they try to prevent a group of terrorists (the Apostles) from provoking a global catastrophe through a nuclear disaster using stolen plutonium.

Cruise was in Tokyo Wednesday to promote the new film, accompanied by director Christopher McQuarrie and actors Henry Cavill and Simon Pegg.

Pegg plays Benji Dunn, fellow agent and technician of the IMF team, while Cavill joins the crew for the first time as August Walker, a CIA agent as well as arch-enemy placed in the IMF to supervise Hunt.

In the film, Cruise, who is known for doing his own stunts, races around the Arc de Triomphe in Paris on a motorbike and pilots a helicopter though mountain ravines in Kashmir, among many action-packed sequences. The film had to halt production in London last year after Cruise broke his ankle when he hit a concrete wall as he jumped between buildings, while attached to cables.

Cruise would do rehearsal jumps from an altitude of 25,000 feet four to six times every day before making the actual shot at a designated time right before sunset so McQuarrie could get ideal lighting. He was able to succeed after the 106th jump.

During the entire filming of the jump, Cruise said he was still recovering from his broken ankle.

Cavill noted that he participated in much more practical stunts compared to his role as Superman in “Justice League.” The helicopter crash and a ferocious bathroom fighting scene between Cruise and Cavill stand out.