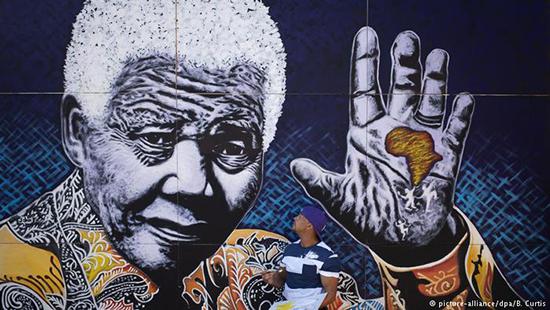 Nelson Mandela would have turned 100 today and political copycats are falling over themselves to add a bit of his luster to their own bespoke suits. But Claus Stäcker asks, what role does Mandela have in society today?

Barack Obama praised Nelson Mandela as the “moral compass” of his political career long ago. Obama spoke about that at length while addressing fans at Johannesburg’s cricket stadium during his current trip to Africa. For a five-figure sum enthusiasts could buy a seat at his dinner table to hear more. It remains to be seen just where Mandela’s needle will point Obama.

Mandela was no saint. Still, next to him every well-known personality shrank to size. Mandela exhibited equal respect for musicians and presidents, queens and prison guards. By the time he was released from prison, after 27 years behind bars, he had become a global brand, an idol the world over, a projection overladen with expectations. Suddenly, he stood there upon the world stage and he seized the opportunity. Unlike others, he had a vision and a moral compass, as Obama so rightly recognized.

Not vengeful despite unjust imprisonment

Mandela described his seemingly endless years in prison as a “university behind bars.” During that time he became neither angry nor a populist. He says he learned humility, patience and tolerance there. Some critics, such as the radical recruiter Julius Malema, the head of the Economic Freedom Fighters (EFF) so popular among South Africa’s poor, say that he learned too much thereof. Malema and his people preach a dangerous brand of reverse racism but they also have a strong argument: After two decades, not all South Africans are afforded the same chances of success. Nowhere in the world is the chasm between rich and poor greater than in South Africa. Wealthy locals and elite Europeans there live in high-security villas, “gated communities” that are hermetically sealed and police-protected mini-paradises. On the other end of the economic spectrum, locals and migrants are locked in a brutal xenophobic struggle.

Meanwhile, we in the West are no longer so far removed from that reality. Gated communities are springing up across Europe like never before. The rich hide in their villas and politically correct middle-class citizens in their suburbs while entire neighborhoods in European cities mutate into socio-political hotspots, giving rise to parallel worlds.

The gap between rich and poor is widening. In Germany, where the state is collecting historically high sums of taxes, the education gap between rich and poor continues to grow. Children from socially disadvantaged families are born into a situation in which they can never catch up. If that gap keeps growing in prosperous Germany how are other less-prosperous societies expected to cope?

Egoism on the march

Today, Mandela’s ideals are running into a wall of egoism across the globe. Until recently an entire presidential clan plundered the state coffers of his home country with impunity. From Ankara to Budapest, and Moscow to Washington, egocentric leaders are calling the shots. At the same time, the decades-old success model of social market economy and representative democracy seems to have lost its bearings and social cohesion is crumbling as a result.

Of course every society must ask itself how generous it can afford to be. Or whether it is being taken advantage of. If its rules and laws can be accepted and maintained. How much foreignness it can tolerate. And whether asylum rights are being granted to the wrong people. Nevertheless, the immigration debate in Europe has deteriorated into one solely concerned with distribution, into a kind of self-defense debate. Raise the walls and close your eyes! And then head off to your yoga class to get in touch with your inner self.

Society’s rhetoric has come to the point that it does not even bother to disguise this new erosion of solidarity. Political language has become cruder than ever and is at times dehumanizing. Our lack of empathy for others is nothing less than shocking.

How much solidarity can and will the world exhibit?

No wall can stand in the way of the desire for a better life. Yet not everyone can flee; many must remain and find solutions right where they are. And Development Minister Gerd Müller’s budget will never be big enough to provide those solutions. Still, the big Mandela question today is: How much solidarity can we – must we – provide? Nelson Mandela’s greatest feat was to transcend ideology. To be able to listen to others and refuse to view those with different opinions as enemies. Thus he, a black man, became a role model for whites, communists, business leaders, Calvinists and Muslims.

Of course one can bemoan the fact that there are no Mandelas in the world today. But on this Nelson Mandela International Day one question may be enough to alter that flawed formulation: How much Nelson Mandela resides in each and every one of us? What are we willing to do? Are we prepared to give up some of our own wealth, and if so, how much? Or would we rather use sharp elbows to make sure that we get our spot on the spaceship?