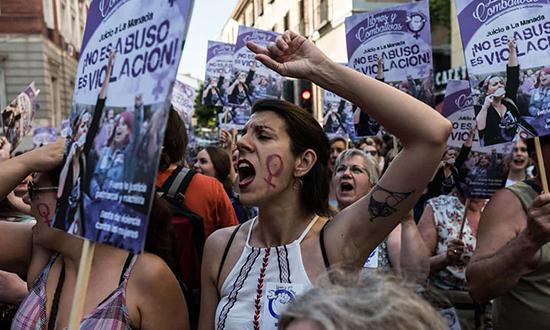 Spain’s socialist government is to introduce a law on consent aimed at removing ambiguity in rape cases.

Under the law, consent would have to be explicit. It states that “yes means yes” and anything else, including silence, means no. Sex without explicit consent would therefore be considered rape.

The move follows outrage over the verdict in the la manada (wolf pack) case. The five men involved were accused of gang-raping an 18-year-old woman in Pamplona during the bull-running festival.

Two of the men filmed the assault, during which the woman is silent and passive. The judges interpreted this as consent – one judge even commented that she appeared to be enjoying herself – and the charge was dropped from rape to the lesser crime of sexual assault.

Under Spanish law, rape must involve violence and intimidation. The la manada ruling provoked outrage and led to demonstrations across the country. The five men are out on bail pending an appeal against their nine-year sentence. Among them are a soldier and a member of the civil guard, both of whom have been returned to duty.

In her summing up for the prosecution, Elena Sarasate said: “The defendants want us to believe that on that night they met an 18-year-old girl, living a normal life, who after 20 minutes of conversation with people she didn’t know agreed to group sex involving every type of penetration, sometimes simultaneously, without using a condom.”

Proposing the law, Carmen Calvo Poyato, Spain’s deputy prime minister and equality minister, said: “If a woman does not expressly say yes, then everything else is no.”

Patricia Faraldo Cabana, a law professor at the university of A Coruña, who helped draft the law, said the proposal understood consent not just as something verbal but also tacit, as expressed in body language.

The law mirrors similar legislation that came into force in Sweden at the beginning of July.