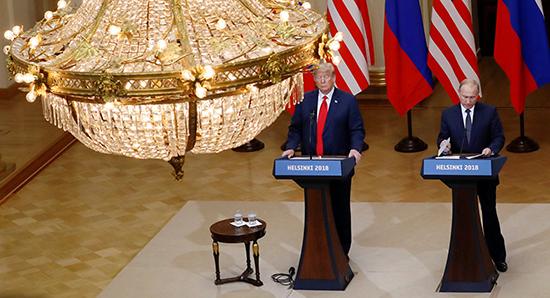 US president hits out at comments about his relationship with Putin

Donald Trump has accused critics of “Trump derangement syndrome” as the fallout from his summit with Vladimir Putin showed no sign of abating.

The US president might be regretting his partial climbdown on his drawing a moral equivalence between the Kremlin and American intelligence and law enforcement agencies, which triggered accusations of treason.

“Some people HATE the fact that I got along well with President Putin of Russia,” Trump tweeted on Wednesday. “They would rather go to war than see this. It’s called Trump Derangement Syndrome!”

The phrase “Trump derangement syndrome” had just appeared in a column in the New York Times, which Trump is known to read closely. The Kentucky senator Rand Paul had also used it in defending Trump’s summit with the Russian president.

Trump’s tweet was one of several aimed at defending his handling of the meeting. In another, he wrote: “So many people at the higher ends of intelligence loved my press conference performance in Helsinki. Putin and I discussed many important subjects at our earlier meeting. We got along well which truly bothered many haters who wanted to see a boxing match. Big results will come!”

At the Helsinki press conference, with Putin at his side, Trump claimed: “My people came to me. They said they think it’s Russia. I have President Putin; he just said it’s not Russia. I will say this: I don’t see any reason why it would be.”

On Tuesday, back at the White House, he blamed his own bad grammar: “The sentence should have been: ‘I don’t see any reason why it wouldn’t be Russia’ – sort of a double negative. So you can put that in, and I think that probably clarifies things pretty good.”

For Trump, such U-turns are rare but not unknown. Last year he sought to blame both sides for deadly attacks by white supremacists on activists in Charlottesville, Virginia; he later tried to back down, only to then revert to his original position.

More recently, he signed an executive order to end the policy of separating undocumented immigrant parents from their children at the Mexican border, but later comments expressed no contrition. It remains to be seen whether his apology to Theresa May for undermining her in a Sun interview will hold for long.

The latest reversal came about after Trump, who left Finland in triumphant mood, reportedly became mortified and furious as he watched the backlash on television on Air Force One.

John Kelly, the White House chief of staff, told Trump it would damage him in the eyes of the special counsel Robert Mueller, who is investigating alleged collusion between his election campaign and Moscow, according to Vanity Fair. Citing three unnamed sources, its report said: “Kelly called around to Republicans on Capitol Hill and gave them the go-ahead to speak out against Trump.”

A sprinkling of Republicans – though by no means all – who have defended Trump through thick and thin distanced themselves from the president, including the Senate majority leader, Mitch McConnell, and the House speaker, Paul Ryan, who held televised press conferences to insist Russia had interfered in the 2016 presidential election.

Even Fox and Friends, the loyal morning show that Trump consumes religiously, piled on the pressure. The host Brian Kilmeade spoke directly to the camera and said: “This is something that needs to be corrected.” The Wall Street Journal was also unusually critical, describing a “national embarrassment”.

The chorus appeared to tell as Trump realised he had made a colossal political blunder. The New York Times reported: “Later in the morning, Mr. Trump told aides he realized he needed to make a correction, according to the person who was briefed. His team met briefly to discuss what to say, and the speechwriter, Stephen Miller, drafted something that was rewritten several times.”

The president read scripted remarks, stating that he accepted the conclusions reached by the US intelligence community that Russia interfered in the 2016 election, but then characteristically muddied the waters by apparently ad libbing that there “could be other people also”.

At one point the room was plunged into darkness, reportedly because Kelly accidentally flicked the switch. “Oops, they just turned off the lights,” said Trump, joking: “That must have been the intelligence agencies.”

The hastily organised reversal was applauded by some. Newt Gingrich, the former House speaker who had criticised the Helsinki press conference as “the most serious mistake of his presidency”, told the Guardian on Wednesday: “He came a long way if you read his remarks to the congressmen. He was pretty clear that he had made a mistake.”

Others, however, regarded the remarks as too little too late, as they failed to address his attacks on the justice department or FBI or his claim on Monday that Putin had given an “extremely strong and powerful” denial of involvement. He repeated once again that there was no collusion.

Senator Tim Kaine, who was Hillary Clinton’s running mate in the 2016 election, tweeted: “I keep hoping that maybe, just maybe, we will all find out soon that the Helsinki summit was actually just a Sacha Baron Cohen episode.”