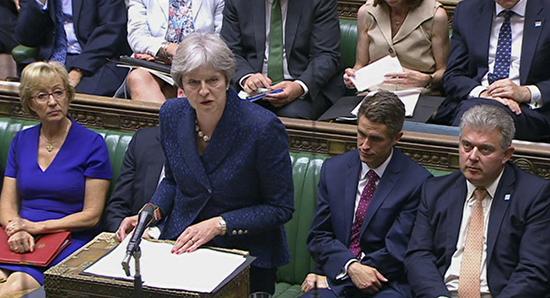 The Times reported that Tory whips, who oversee discipline in the party, issued the warning to pro-EU lawmakers, led by the former ministers Stephen Hammond and Nicky Morgan, minutes before a crucial vote on Tuesday that would have kept Britain inside a customs union.

UK Prime Minister Theresa May has threatened rebel Conservative lawmakers with a general election this summer if they defeated her plans on customs after Brexit, the news outlet reported on Wednesday.

The UK Parliament voted 307 to 301 against an amendment to the trade bill that would have required the government to try to negotiate a customs union arrangement with the European Union by January 21, 2019.

Theresa May nearly avoided a parliamentary defeat at the hands of pro-EU lawmakers from her own party in the vote, the UK-based media outlet reported.

There have been four major votes in recent British political history: the Scottish independence referendum of 2014, the 2015 UK election, the Brexit referendum of 2016 and the snap election called by the UK Prime Minister last year.

Last week, Theresa May said that the possibility for the country to stay within the EU single market and customs union after Brexit is not up for discussion.

On July 12, the UK government published its long-anticipated White Paper on the United Kingdom’s relations with the European Union after Brexit. In the document, London outlined its plans to leave the EU Single Market and the Customs Union, ending free movement and the jurisdiction of the European Court of Justice in the United Kingdom. The UK government announced its plans to introduce a special customs procedure with the European Union, which would be implemented in stages.

The White Paper also proposed the establishment of a new partnership in the security field, providing for close cooperation between EU and UK law enforcement agencies, an exchange of intelligence information and the United Kingdom’s participation in the work of the Europol and Eurojust.

The White Paper also indicated that the principle of the freedom of movement between the United Kingdom and the European Union would be applied only to young people, students and tourists after Brexit.

On June 23, 2016, the United Kingdom voted in a referendum to leave the European Union. Last March, UK Prime Minister Theresa May officially invoked Article 50 of the Lisbon Treaty, launching the process of the country’s withdrawal from the bloc. The Brexit negotiations between London and the European Union started last year and are due to be completed by the end of March 2019.