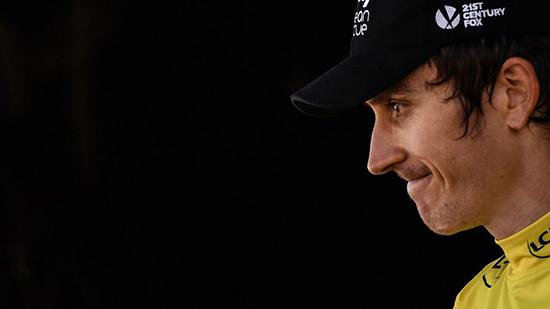 Geraint Thomas rode his way into the yellow jersey with a memorable victory on stage 11 of the Tour de France to La Rosiere.

The Team Sky rider attacked six kilometres from the top of the final climb of this 108.5km stage from Albertville to claim his second career Tour stage win.

His mission when he first made his move was to catch rival Tom Dumoulin, the Team Sunweb rider who was looking to make his own gains in the general classification.

But when former team-mate Mikel Nieve slid into view, trying to win the stage from the breakaway, another prize was on offer and Thomas kicked again, passing the Mitchelton-Scott man inside the final 400 metres.

Team-mate Chris Froome came in third, alongside Dumoulin, some 20 seconds later in a pretty much perfect day for Team Sky as they made up time on their rivals.

Thomas now leads by one minute 25 seconds from Froome, with Dumoulin a further 19 seconds back in third place.

It is a second spell in yellow for Thomas after he held it for four days of last year’s Tour following victory in the opening time trial in Dusseldorf.

Though the sight of Sky massed on the front of the peloton most of the day was not one to excite fans, Thomas delivered the stage win with panache.

With BMC’s Greg Van Avermaet struggling off the back of the peloton by the midpoint of the stage on the Col du Pre, the battle for yellow was on.

Movistar’s Alejandro Valverde tried a long-range attack, while Dumoulin attacked on the descent of the penultimate climb, the Cormet de Roseland, linking up with Valverde before the road rose up again towards La Rosiere.

But Sky kept their powder dry until Thomas launched his move. Froome initially held back, marking counter-moves from AG2R La Mondiale’s Romain Bardet and UAE Team Emirates’ Dan Martin before leaving them both behind and catching Dumoulin.