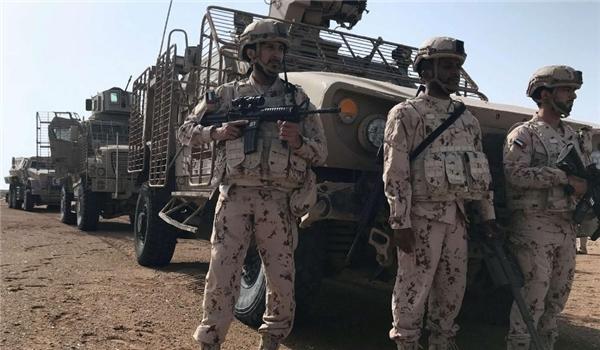 The Arabic-language al-Morasel news website reported that two Yemeni girls, both under 20 years of age, have been kidnapped and raped by the security forces of the UAE in the past week.

The parents of the two girls have received life threats from the UAE troops to keep mum about the incident.

According to the report, the UAE forces lead a gang of the loyal security forces who abduct young Yemeni girls and women and surrender them to the UAE military officers “for partying”.

Other Arab media outlets have been releasing similar reports in the last few months.

Relevant reports said last month that hundreds of detainees had been sexually abused at a jail in Southern Yemen believed to be run by the United Arab Emirates, according to several witnesses.

Fifteen officers who arrived at Beir Ahmed prison in Aden hid their faces behind their headdresses, but their accents were clearly identifiable as from the UAE, Associated Press reported.

The men screamed and wept. Those who resisted were threatened by barking dogs and beaten until they bled, witnesses said.

Descriptions of abuse suggest sexual torture is rampant in UAE-controlled prisons in Yemen.

The Saudi-led coalition, including the UAE, has been striking Yemen since March 2015 to restore power to fugitive president Mansour Hadi, a close ally of Riyadh. The Saudi-led aggression has so far killed at least 17,000 Yemenis, including hundreds of women and children.

Despite Riyadh’s claims that it is bombing the positions of the Ansarullah fighters, Saudi bombers are flattening residential areas and civilian infrastructures.

According to several reports, the Saudi-led air campaign against Yemen has driven the impoverished country towards humanitarian disaster, as Saudi Arabia’s deadly campaign prevented the patients from travelling abroad for treatment and blocked the entry of medicine into the war-torn country.

Yemen is the world’s largest humanitarian crisis with more than 22 million people in need and is seeing a spike in needs, fuelled by ongoing conflict, a collapsing economy and diminished social services and livelihoods.

A UN panel has compiled a detailed report of civilian casualties caused by the Saudi military and its allies during their war against Yemen, saying the Riyadh-led coalition has used precision-guided munitions in its raids on civilian targets.