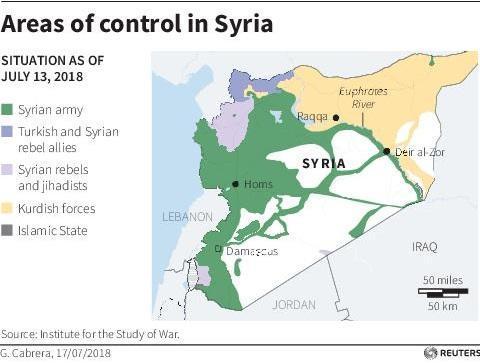 The U.S.’s main ally in Syria has begun preparing for negotiations with the Syrian government, which has once again emerged as the leading power in the war-ravaged country in spite of a West-sponsored rebellion to overthrow its president.

The Syrian Democratic Council—the political wing of a largely Kurdish, U.S.-backed military alliance of Arabs and other sects known as the Syrian Democratic Forces (SDF)—launched a three-day conference Monday in the northern Syrian town of Tabqa. The gathering revolved around the country’s political future and reportedly included both Kurdish officials and members of Syria’s political opposition not participating in the seven-year civil war between the government and insurgents.

“One of the meeting’s aims is to create a platform to negotiate with the Syrian regime,” a senior member of the Syrian Democratic Council, Hekmat Habib, told Agence France-Presse on Monday.

“This platform will represent all areas in the autonomous administration and all areas held by the SDF,” he added.

Tabqa is part of the roughly one-quarter of the country under the control of the SDF, which has received support from a U.S.-led coalition in the battle against the Islamic State militant group (ISIS). Save for rapidly collapsing pockets of land under the control of rebels and jihadis, the rest of the country has been reclaimed by Syrian President Bashar al-Assad’s forces in an ongoing military campaign backed by Russia and Iran.

The U.S. called for the Syrian leader to step down in the wake of a 2011 uprising against him, and it joined Turkey and Gulf Arab states in funding various rebel groups. However, as Syria’s loosely bonded opposition grew increasingly Islamist in nature and Russia intervened in support of Assad, the pro-Syrian government campaign regained momentum. At the same time, the U.S. shifted its priorities away from regime change and toward battling ISIS in Syria and neighboring Iraq, where the group originated from a Sunni Muslim insurgency sparked by a U.S. invasion a decade earlier.

Unlike Syria’s rebel opposition, the SDF has not explicitly called for Assad to step down. In an equation that demonstrates the complexity of the Syrian conflict, a number of the Pentagon-backed alliance’s Kurdish fighters have actually fought alongside pro-Syrian government fighters against rebels that once received CIA assistance, as well as Turkey, the U.S.’s NATO ally.

Turkey is a fierce opponent of Kurdish aspirations for autonomy, but Syrian government officials such as Foreign Minister Walid al-Muallem have expressed some flexibility in allowing a limited degree of self-rule across Kurd-controlled areas in the north and northeast. Preliminary talks to this end have reportedly included handovers of territory, including oil-rich stretches of Deir Ezzor, where the Kurds are not a majority.

The Syrian Democratic Council launched its Tabqa conference on the same day President Donald Trump and Russian President Vladimir Putin held their first bilateral summit in the Finnish capital of Helsinki. Among other top security issues, the leaders appeared to establish common ground on their rival military campaigns in Syria. Trump was a vocal critic of his predecessor’s plan to back Syrian rebels and overthrow Assad and has called for the U.S. and Russia to work together in Syria.

Nevertheless, Trump has joined other Western leaders in accusing Assad of human rights abuses and has launched missile strikes against Syrian government sites in response to alleged chemical weapons attacks. Still, even Trump’s enmity toward Assad ally Iran was not enough to stop him from expressing a desire to withdraw from the conflict entirely.

Israel has stepped up attacks on suspected Iranian positions in Syria but has also softened its tone against the Syrian leader. In a recent interview with local newspaper Al-Rai, Brigadier General Khaled al-Massaid of Jordan, which has supported the Syrian opposition, even praised the return of the Syrian army to the border as a positive development and a chance to restart cooperation between the two countries. Syria and Iraqi officials also discussed reopening their borders on Monday, according to the official Syrian Arab News Agency.

People hold a Syrian flag along with a picture of Syrian President Bashar al-Assad in Daraa, Syria, on July 4. The Syrian military recently retook the former revolutionary stronghold in a monthlong campaign that had Syria’s armed forces approaching their longtime foe in the Israel-occupied Golan Heights. Omar Sanadiki/Reuters

While pro-Iran fighters have reportedly pulled back from the latest Syrian offensive in former rebel-held Daraa as part of an international understanding to avoid unnecessary conflict with Israel in the Golan Heights, Assad has reiterated Iran’s right to operate in Syria as a national partner and has called on other, uninvited foreign powers, such as the U.S. and Turkey, to withdraw.

In May, Assad told Russia’s state-run RT channel that he was willing to talk to the SDF, saying the government had “started now opening doors for negotiations” to reunify the country. But if this did not work, he said, the military was “going to resort to liberating by force.”