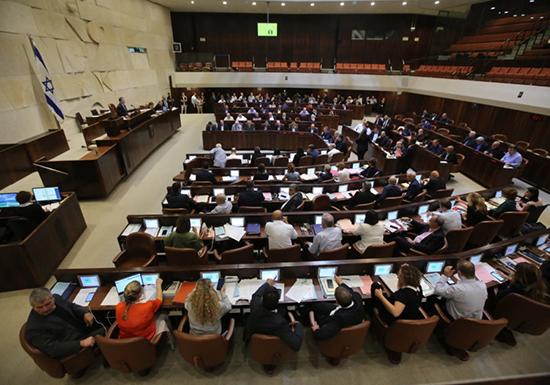 The law passed after a stormy debate full of theatrics that stretched more than eight hours.

The controversial Jewish nation-state bill became Israel’s 14th Basic Law early Thursday morning after it passed into law in the Knesset plenum by a vote of 62 in favor, 55 against, and two abstentions.

The law passed after a stormy debate full of theatrics that stretched more than eight hours.

Applauding the vote, Prime Minister Benjamin Netanyahu described the law as “a defining moment in the history of Zionism and the history of the State of Israel.

“122 years after Herzl published his vision, we have stated by law the basic principle of our existence,” Netanyahu said from the Knesset podium.

The head of the special committee that legislated the bill, MK Amir Ohana (Likud), told the plenum it could be the most important legislation in the history of the state. He said the bill had been discussed more than any of the basic laws that have been passed before.

The law’s sponsor, Knesset Foreign Affairs and Defense Committee chairman Avi Dichter, turned to Arab MKs in the final address before voting and told them: “We were here before you, and we will be here after you.” But he said their rights as minorities would not be harmed by the law.

“We are now seeing with shock the death of our democracy, which has been dying in recent years, and suffering from the racism that has hit a new peak with this bill,” Joint List MK Ahmed Tibi said earlier in a meeting of Ohana’s committee that legislated the bill and approved it by an 8 to 7 vote Wednesday morning along coalition and opposition lines.

The Jewish nation-state bill is a Basic Law with constitutional heft that declares Israel is the nation-state of the Jewish people. It anchors in law the state’s menorah emblem, Jerusalem as Israel’s capital, national holidays and the right of all Israeli residents to preserve their heritage without consideration of religion and nationality.

The two most controversial clauses in the bill were changed.

A clause that could have permitted one religious group to bar another from living in their community was replaced with one saying that “The state sees developing Jewish settlement as a national interest and will take steps to encourage, advance, and implement this interest.”