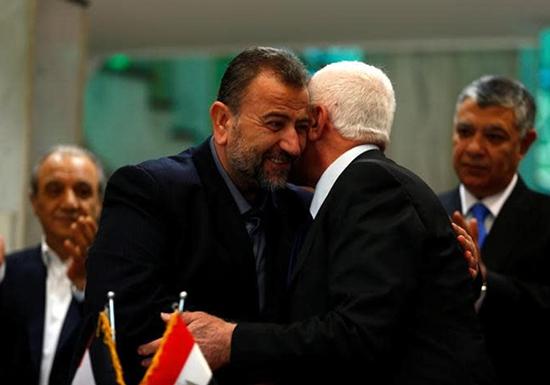 Egypt has exerted heavy pressure on Hamas and Fatah to end the enmity between them.

Hamas has accepted an Egyptian proposal to reconcile with Fatah and is awaiting a response from its rival Palestinian faction, senior Hamas officials said on Wednesday.

Egypt has exerted heavy pressure on Hamas and Fatah to end the enmity between them, so they can form a Palestinian national unity government.

Senior Hamas official Musa Abu Marzouk revealed on Wednesday that Egypt has presented his movement and Fatah with a new reconciliation proposal.

Hamas has accepted the proposal which, Abu Marzouk said, calls for the immediate lifting of sanctions imposed a year ago on the Gaza Strip by the Fatah-led Palestinian Authority.

The proposal also calls for allowing the West Bank PA government to assume its responsibilities in the Gaza Strip in accordance with previous “reconciliation agreements” signed between Hamas and Fatah, he said.

Abu Marzouk told the Palestinian Safa news website that the Egyptian proposal allows Hamas to collect taxes and tariffs in the Gaza Strip on behalf of the PA government.

The move is aimed at allowing Hamas to pay salaries to its 20,000 employees in the Gaza Strip, including members of its security forces and armed groups. The PA government, based in Ramallah, has refused to put Hamas’s employees on its payroll.

The proposal also calls for creating a unified judicial system and “land authority” for the West Bank and Gaza Strip under Egyptian supervision, the Hamas official added.

Abu Marzouk was part of a high-level Hamas delegation that was invited to Cairo last week for talks with heads of Egypt’s General Intelligence Directorate, known in Arabic as al-Mukhabarat, on ways of ending the dispute with Fatah and avoiding a military conformation with Israel. He said that the head of the Egyptian General Intelligence Directorate expressed during the discussions his desire to visit the Gaza Strip.

Another Hamas official, Mahmoud Zahar, said that his movement was now waiting for Fatah’s response to the Egyptian proposal. The basis for achieving reconciliation with Fatah lies in the implementation of previous agreements signed between the two sides, he said. He added that in order for the reconciliation to succeed, the PA should lift its sanctions on the Gaza Strip, resume payments to thousands of civil servants and agree to the formation of a national unity government.

Fatah spokesman Atef Abu Seif said that his faction was planning to hold a meeting to study the new Egyptian proposal.

The proposal, he said, was not much different than Fatah’s view regarding the power struggle with Hamas.

He told the Jordanian Al-Ghad television network that Fatah has full confidence in Egypt’s role as a mediator between his faction and Hamas.

UN Special Coordinator to the Middle East Peace Process Nickolay Mladenov of Bulgaria has been one of the key diplomatic figures working with Egypt toward a cease-fire and a rehabilitation plan for Gaza.

The reconciliation of Hamas and Fatah is one of the cornerstones of his plan.

On Wednesday, Mladenov was in Oslo, where he met with representatives from the European Union, Norway, the World Bank and the PA.

He tweeted that they were “working closely and coordinating immediate steps to alleviate the situation in Gaza, address all humanitarian issues and support Egyptian reconciliation efforts. All efforts depend on giving peace a chance.”

In a separate tweet, Mladenov said, “Making progress in Oslo! Good discussions on how to move quickly on de-escalating the situation in Gaza. It is VITAL that everyone pulls back from the brink. The Palestinian people and Israeli communities have lived long enough in fear.”

Hamas has ruled the Gaza Strip since 2007 when it kicked Fatah out in a bloody coup.

Tovah Lazaroff contributed to this report.