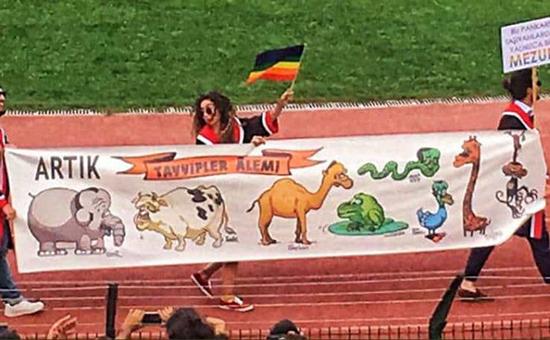 President Recep Tayyip Erdoğan filed a criminal case against Republican People’s Party (CHP) leader Kemal Kılıçdaroğlu and 72 deputies on accusations of insulting him by posting a caricature of him deemed to be offensive on social media.

The caricature, called Tayyipler Âlemi (World of Tayyips), had also led to the arrest of four Middle East Technical University (ODTÜ) students who displayed it during graduation ceremonies earlier this month.

Kılıçdaroğlu posted the caricature on Twitter, saying a president should be able to tolerate criticism and humor.

During the ODTÜ graduation ceremony on July 6 a group of students carried a placard bearing the caricature, which was first published in 2006 by the Penguen political satire magazine.

Then-Prime Minister Erdoğan filed a lawsuit against the magazine; however, an Ankara court had dismissed the suit, citing freedom of expression.

Still, three students who held the placard during the ceremony and one who helped them bring it to the venue in her car were arrested by a court last week.