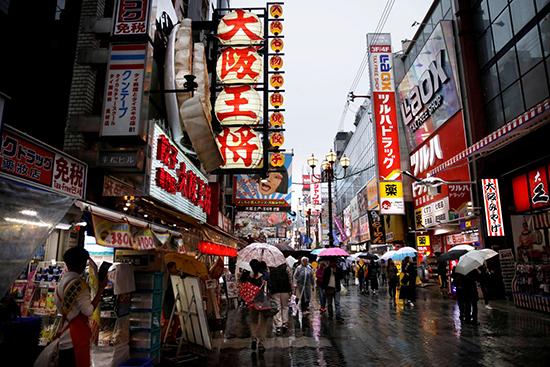 Exports to the United States dipped 0.9 percent in June from the same period a year ago on waning shipments of cars and semiconductor manufacturing equipment, two of Japan’s most important export products.

Thursday’s trade data came on the heels of the Reuters Tankan, which showed business sentiment slipped in July, reflecting companies’ fears about an intensifying trade dispute between the United States and China.

The batch of data highlighted concerns among Japanese policymakers who worry Trump may resort to tariffs or other protectionist measures to fix trade imbalances with Japan under his “America first” policy.

With American imports down 2.1 percent, Japan’s trade surplus with the United States widened 0.5 percent year-on-year to 590.3 billion yen ($5.24 billion). That could make it a potential target for Trump’s protectionist policies.

“Overall exports remain healthy for now, but we are not sure how things are going to turn out on the trade policy front,” said Shuji Tonouchi, senior market economist at Mitsubishi UFJ Morgan Stanley Securities. “It’ possible talk of tariffs and trade friction could reduce corporate investment.”

The Reuters Tankan, which tracks the Bank of Japan’s closely watched quarterly tankan survey, found manufacturers’ sentiment index stood at 25 in July, down one point from June, and the service sector’s mood fell to 34 from 35 in the prior month.

The index subtracts the percentage of companies that feel negative about the economy from those who are optimistic, so a positive number means more businesses are upbeat.

Concerns about protectionism were widely cited in the Reuters poll of 483 large- and mid-sized companies, of which 268 responded between July 2-13, particularly among exporters of cars, precision machinery and metal products.

The United States this month imposed 25 percent tariffs on $34 billion of Chinese goods to lower the U.S. trade deficit, and China quickly retaliated with an increase in tariffs on U.S. goods.

“Our clients are increasingly taking a wait-and-see stance on capital expenditure in the face of uncertainty over trade friction between the United States and China and the EU,” a manager of a machinery maker wrote in the survey.

“Uncertainty is rising over capital spending plans at our client firms due to the expansion of protectionist policies and geopolitical risks,” said another machinery maker.

The manufacturers’ index is seen rising to 29 in October, while the service-sector index is expected to hold steady, after July’s decline led by real estate/construction firms.

The BOJ’s tankan showed earlier this month that big manufacturers’ mood soured for a second straight quarter in the three months to June, hurt by rising input costs and as U.S. trade protectionism clouds the outlook for Japan’s export-dependent economy.