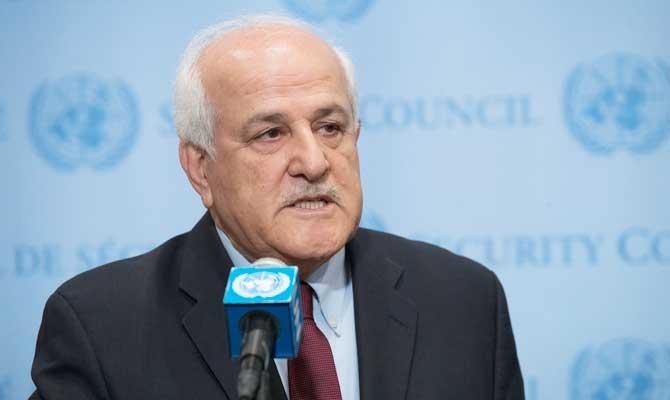 UNITED NATIONS: The Palestinians are protesting the US refusal to grant visas to six experts from the prime minister’s office to come to the United Nations to present a report on Palestinian implementation of UN goals for 2030.
The Palestinian UN ambassador, Riyad Mansour, told two reporters Wednesday that Israel “complicated the matter” by refusing to allow several of the experts to travel from Ramallah to Jerusalem where the US Consulate is located to check on their visas.
“We condemn this action,” Mansour said.
He said it violates the UN agreement with the United States as host country of the world organization, which requires the US to facilitate UN work and allow delegates to attend UN meetings.
Mansour said he plans to send a letter of protest to the General Assembly committee dealing with host country relations.
The US Mission said it was looking into the complaint. Israel’s UN Mission did not immediately respond to an email seeking comment.
Since the experts couldn’t attend the high-level meeting taking place this week at UN headquarters, Mansour said he and his team “were able to improvise” and presented the Palestinian report on Tuesday. He said it “received a long applause from the participants.”
Mansour said he started the presentation by “condemning the fact that they were denied visas, and the work of our delegation was obstructed in violation of the headquarters agreement.”
The high-level meeting is hearing what nearly 50 countries are doing to implement the UN goals to combat poverty, promote development and gender equality, and preserve the environment by 2030.
The General Assembly voted overwhelmingly in November 2012 to upgrade the Palestinians’ status from a UN observer to a non-voting observer state, enabling it to make a voluntary report.
Mansour said that although the Palestinians are trying their best to fulfill the different UN goals by 2030, “the overriding issue influencing our effort to accomplish these objectives is the negative effect of occupation” by Israel.
In spite of that, he said, “we almost have 100 percent of education for our kids, our illiteracy is close to zero, there’s improvement in the medical field, but there’s need and challenges.”
Mansour said the Palestinians need more hospitals, more schools in east Jerusalem and elsewhere, and more housing.
“In terms of food security, we don’t have people who are starving although 1.2 million of the population in the Gaza Strip rely on food program assistance and help from UNRWA,” which is facing a funding crisis after major US cuts.