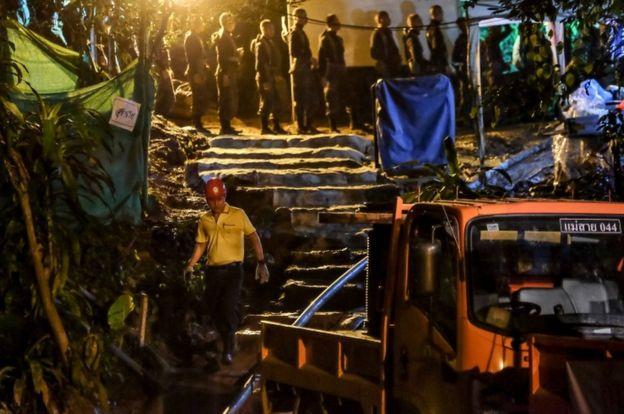 The remarkable rescue of 12 boys and their football coach who were trapped in a flooded cave network in Thailand’s Chiang Rai province gripped the world.

Speaking in public for the first time since their ordeal, the Thai youngsters looked happy and relaxed as they sat alongside Thai Navy Seals and prepared to share details of how they spent two weeks in darkness underground.

The boys appeared in matching football shirts emblazoned with images of wild boars – the name of their team – presented to them by Thailand’s King Maha Vajiralongkorn, and answered a set of questions specially selected to avoid causing them distress.

The team’s miraculous story has been widely reported – but it still remained for them to fill in the details. Here’s what we learned from Wednesday’s press conference.

On 23 June, following a football training session, the team’s coach Ekkapol “Ake” Chantawong said the group had agreed to go “sightseeing” and visit the Tham Luang caves for the first time.

“We planned to go for an hour,” he said.

Ake said it was not, as earlier reported, to celebrate a birthday – although one of the boys, Peerapat Sompiangjai, known as Night, said he was keen to be home before 17:00 because his parents had prepared a party for his 17th.

“We walked normally… [but] after we went into the cave, we knew we were stuck on the way back out,” Ake said. The group had started to notice pools of water as they made their back way through the tunnels.

“Some asked if we were lost. I said we weren’t going in the wrong direction.”

Ake said that after realising they were indeed lost, the group walked until they found a dry, sandy spot.

“We stayed near a water source. We slept at this sand spot. Before we slept, we prayed to Buddha. We thought in the morning, water would come down and officials would look for us. We weren’t scared at that time.”

Between pauses, the group walked around the complex in an attempt to find an exit, while using the flashlight “sparingly”, Ake said.

But as time went on, the boys started to lose their strength.

One of the boys described how they drank water as it trickled down the rocks, but said that there was no food to eat.

“I fainted. I had no energy and was very hungry. I tried not to think about food because it would make me hungry,” said Chanin Vibulrungruang.

Ake said they reached a point where they wanted to do more than just wait to be found.

“We tried to dig [ourselves] out. We took turns digging at the cave walls. We didn’t want to wait around until the authorities found us.”

One of the boys said they used stones to dig at the walls.

Ake added that contrary to some reports, all of the boys can swim, although some “aren’t strong swimmers”.

To help pass the time, the group said they played checkers together.

“It happened in the evening,” said Adul Sam-on, 14, who described the moment that two British divers discovered them squatting in the flooded chamber as a “miracle”.

“We were sitting on a stone. We heard some people talking. Coach told us to be quiet and listen,” he said.

Adul, the only member of the group who speaks English, said he took the flashlight and rushed down towards the divers, then when they surfaced to talk, “I said hi”.

“I was stunned because they were English, so I said ‘hello’. They asked how are you? So I said I am okay. I asked if they wanted any help. And they said no and told me to go back up. Then he said, how many of you?”

Adul said that having already spent nine days in the cave, “maths and language didn’t work in my brain any more”.

When asked about the volunteer and former Navy Seal diver, Saman Gunan, who lost his life on 6 July while installing oxygen tanks in the flooded cave complex, Ake said that the whole group was shocked and saddened by the news.

“They felt like they were the reason he had to die and his family had to suffer,” he said, adding that “Saman sacrificed his life to save us, so that we could go and live our lives.”

Ake said the boys would spend time as novice Buddhist monks to honour the diver’s memory.

The boys were only told of Saman Gunan’s sacrifice on Saturday, when it was determined that they were strong enough to take the news.

“All cried and expressed their condolences by writing messages on a drawing of Lieutenant Commander Saman and observed one minute of silence for him,” said Jedsada Chokdamrongsuk, permanent secretary at the health ministry.

Coach Ake said the plan was discussed in detail with the rescuers and Thai Navy Seals.

The group ultimately decided on a risky operation that involved diving through waterlogged passages while the boys were sedated to keep them calm, and then carried out on “military-grade stretchers”.

When asked if the plan had involved bringing the boys out in a certain order, Ake said it hadn’t.

“They chose to go out voluntary. No weaker or stronger first.”

Dr Pak Loharnshoon, who was also at Wednesday’s press conference, said that as all of the boys were healthy enough to be moved, “any of them could go out first”.

Ake said it came down to “whoever raised their hands first would go out first… some of them didn’t want to go because they wanted to stay with the Seals”.

Dr Pak said that when the boys were first delivered food in the cave, they found it so delicious that some of them “snuck food out in wetsuits”.

With their press duties now concluded, the boys and their young coach will finally return to their homes on Wednesday night.

Psychiatrists have advised their families that the youngsters should not have contact with the media for at least a month.