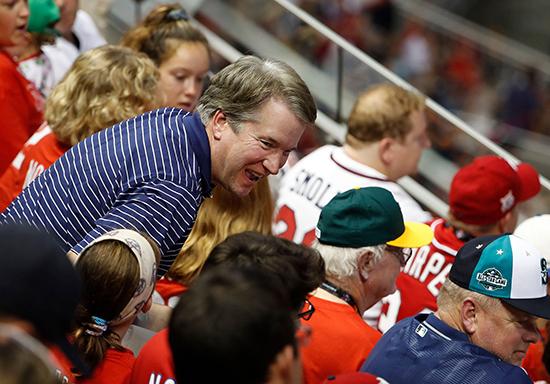 He spent a fortune on tickets for a woebegone baseball team.

Precedent is a big deal at the Supreme Court. On that we can agree, yes?

Has there, then, been any precedent that raises graver questions about a Supreme Court nominee’s fitness than the fact that Brett Kavanaugh got himself as much as $200,000 in debt largely by buying tickets to Washington Nationals games?

Seriously? He imperiled his family’s finances because he couldn’t get enough of the team that has been a bipartisan waste of time and energy for people in Washington for a decade?

Hey, rooting for losers can feel oddly honorable, even vaguely valorous. It’s quite an entertainment to cover, as I did, a pitcher capable of losing 27 straight decisions over two seasons in the early 1990s (yes, Anthony Young of the Mets was pitching overhand). Or report on, as I did, an N.H.L. team that had not won a Stanley Cup in more than half a century. (I’d moved from covering the New York Rangers to covering the New York Mets by 1994, the year the Rangers won the Cup.)

But the Nats? They are the most soul-sucking strain of professional sports franchise. Not awful. Not great. Just tempting enough for suckers to believe they might be one or the other. Judge Kavanaugh went to Yale Law School, right? My dad did, too, and I’ve smugly bragged on it for years. But maybe reputations aren’t what they seem — Yale’s, I mean, not my dad’s.

Are we so deep into the post-fact era that we can’t expect a Supreme Court nominee to take seriously the irrefutable evidence before him?

So while Judge Kavanaugh’s confirmation hearings are weeks away, it’s not too early for both parties to begin preparing the baseball brief against him.

Start with Bryce Harper. The franchise player for the Nats. The guy looks great with his shirt off. With his shirt on, and a year before free agency, with hundreds of millions of future dollars at stake, he is hitting .214.

Monday night, Harper had what sure looked like a career moment when he won Major League Baseball’s Home Run Derby in front of an adoring crowd. But he’s Bryce Harper. And he plays for the Nationals. And it happened in Nationals Park, where all moments of even modest charm and promise go to die.

Harper had barely completed his triumphant bat flip before reports surfaced that his exhibition victory might have been a genuinely rigged result, an allegation of some popularity in Washington these days. Observers detected that the man soft-tossing baseballs to Harper that night — who, by the way, was Harper’s dad — had violated the rules by feeding his kid an improper number of pitches.

On Tuesday night, in the actual All-Star game, there were a record 10 home runs hit. Exactly none of them by Harper, who went 0-for-2, striking out twice.

Then there is Stephen Strasburg. He was such a surefire pitching prospect in 2010 that The New Yorker profiled him. Of course he blew his arm out in his rookie season, and this year — a now-or-perhaps-never year for the Nats — he has been on the disabled list since June.

There is, too, the team’s new manager, Dave Martinez, named before the season to supposedly put the Nats over the top. I covered Martinez as a player, and while my powers of recall have eroded in all sorts of unfortunate ways, I ought to be able to remember a single distinctive thing he did or said. Of course I can’t because it only makes sense that the Nats, famous for not showing up in big spots, would choose to be led by an invisible former player.

The managing history gets worse. In 2011, Jim Riggleman up and quit on the Nats. His. Own. Team. Midseason. During a hot streak. Seems he wanted a contract extension, though he appeared to stress he wasn’t deluding himself, either.

“I know I’m not Casey Stengel,” Riggleman said at the time.

Few rushed to argue the point.

Americans have come to take a lot for granted about the Supreme Court nomination process. It will be bitter. There will be serious talk about abortion and originalism. But surely judges guilty of crimes don’t deserve a shot, even if the crimes are just against good taste or common sense.

The Nats played their final series of the season’s first half against the Mets last week, one of the few teams actually more snakebit than the Nats. They could do no more than split four games, and so they enter the second half in third place in the National League East with a record that stands at a perfectly appropriate .500 — a living, lightly breathing embodiment of mediocrity.

Judge Kavanaugh dropped tens of thousands on this franchise? I know, I know, it seems like part of his debt resulted from him buying Nats tickets for friends. But still.

Chief Justice John Roberts, you have been forewarned about what Brett Kavanaugh regards as a friendly gesture. He joins you at your peril.

Joe Sexton, a senior editor at ProPublica, is a former sportswriter and editor at The Times.

A version of this article appears in print on July 19, 2018, on Page A21 of the New York edition with the headline: Kavanaugh’s Shameful Weakness. Order Reprints | Today’s Paper | Subscribe

The Untold Story of Sheikh Jarrah