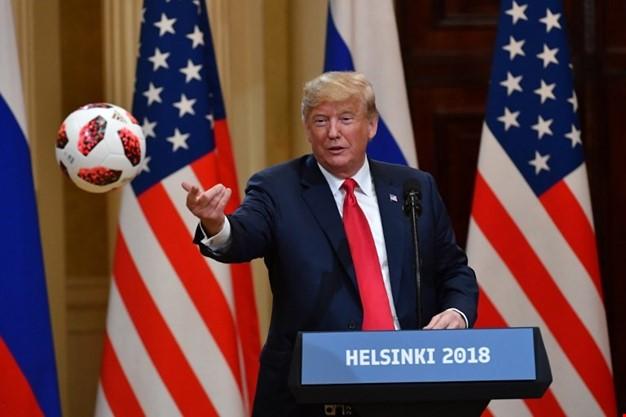 President Donald Trump again rebuked the findings of the U.S. intelligence community Wednesday when he was asked if Russia was still attempting to target the country’s election system.

Following a meeting with his Cabinet, Trump was asked directly if Russia was still “targeting” the U.S. election system, to which the president replied “no.”

The president’s response came just two days after he initially suggested he believed Russian President Vladimir Putin’s denials of interfering in the 2016 election over the conclusion reached by the U.S. intelligence community.

The White House did not immediately respond to Newsweek’s request for clarification about his comment Wednesday.

The response stood in firm contrast to a statement put out by Director of National Intelligence Dan Coats on Monday following Trump’s initial claim of belief in Putin.

“We have been clear in our assessments of Russian meddling in the 2016 election and their ongoing, pervasive efforts to undermine our democracy, and we will continue to provide unvarnished and objective intelligence in support of our national security,” Coats said in a rare public statement.

The president also appeared to contradict testimony from Secretary of State Mike Pompeo before the House Foreign Affairs Committee two months ago, during which he stated the administration would conduct “appropriate countermeasures” to ensure Russia’s “continued efforts” would not interfere in the 2018 midterm elections.

Trump later told reporters that he has been the toughest commander-in-chief against Russia, and pointed to sanctions put in place by his administration against oligarchs and Russian businesses.

“We’re doing very well…Probably as well as anybody has ever done with Russia. And there’s been no president, ever, as tough as I have been on Russia. All you have to do is look at the numbers, look at what we’ve done. Look at sanctions, look at ambassadors not there, look, unfortunately, at what happened in Syria recently,” Trump said.

The president continued: “And I think President Putin knows that better than anybody, certainly a lot better than the media. He understands it, and he’s not happy about it. And he shouldn’t be happy about it because there’s never been a president as tough on Russia as I have been.”

In April, the administration specifically singled out seven wealthy Russians and 17 other government officials with close ties to Putin over alleged interference in the 2016 general election.

However, in January, the Trump administration had initially failed to impose the sanctions that Congress called for in legislation that overwhelmingly flew through both chambers in July of last year.

And while Trump ultimately signed the measure to make it law, the president challenged the bill claiming it “included a number of clearly unconstitutional provisions” and stated it was “seriously flawed—particularly because it encroaches on the executive branch’s authority to negotiate.”