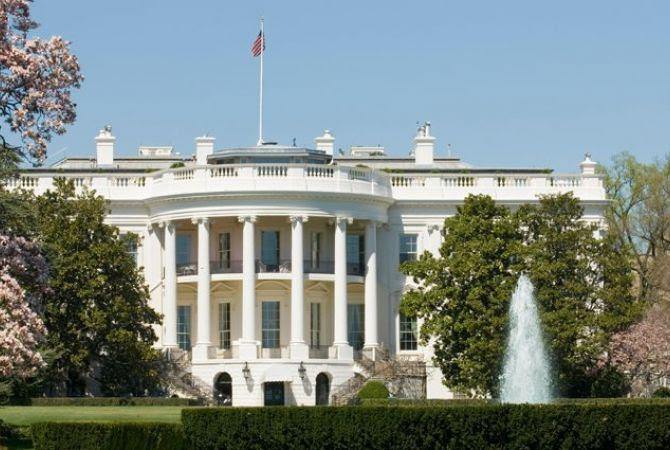 The White House has insisted it believes Russia still poses a threat to the US amid confusion over comments made by President Donald Trump.

Mr Trump appeared to disagree with US intelligence when he responded “no” to a question about whether Russia was still targeting American elections.

It comes amid a flurry of criticism over his recent comments about Russia.

“The president and his administration are working very hard to make sure that Russia is unable to meddle in our elections as they have done in the past,” Mrs Sanders said at a news briefing on Wednesday.

After he shook his head and replied, “Thank you very much, no”, she again asked: “No? You don’t believe that to be the case?”

He appeared to respond again: “No”.

But Mrs Sanders rejected that interpretation later in a news briefing, telling reporters the White House was taking action to prevent any future meddling.

“We wouldn’t actually spend as much time and effort as we are if we didn’t believe that [Russia is] still looking at us,” she said.

Later, Ms Vega tweeted that the president had been looking directly at her when he answered.

NBC News’ White House correspondent Hallie Jackson responded to Mrs Sander’s explanation on Wednesday on Twitter, saying she had “never heard the president say ‘no’ in order to get us to stop”.

The apparent response would put him at odds with US intelligence on claims of Russian interference in US elections for the second time since he met Russian President Vladimir Putin in Helsinki on Monday.

On Tuesday, Mr Trump said he misspoke during Monday’s summit when he appeared to side with Mr Putin over claims of Kremlin meddling in US elections.

US intelligence chief Dan Coats said on Monday that Russia was involved in “ongoing, pervasive efforts to undermine our democracy”.

He told a congressional committee in February he had already seen evidence that Russia was targeting the upcoming mid-term elections in November.

What has Trump said?

During an interview with CBS News’ Jeff Glor on Wednesday afternoon, Mr Trump said that he would consider Mr Putin personally responsible for any Russian interference.

“Just like I consider myself to be responsible for things that happen in this country,” he said. “So certainly as the leader of a country you would have to hold him responsible, yes.”

Mr Trump added that he was “very strong on the fact that we can’t have meddling” in his conversation with Russia’s leader.

On Wednesday morning Mr Trump lashed out at “haters” who condemned his meeting with Russia’s president, saying his critics were suffering from “Trump Derangement Syndrome”.

Despite the controversy, Republican voters seem to be sticking by Mr Trump.

A Reuters/Ipsos poll this week found that despite a firestorm of media criticism, Mr Trump’s Finland summit had no real impact on his overall approval ratings.

In the survey, 42% of all registered voters approved of his job performance, which is consistent with averages thus far.

Some 71% of Republicans polled approved of his response to Russia, while only 14% of Democrats were in favour.

US lawmakers are calling for a court demand to be issued for the notes of the US translator who accompanied Mr Trump to his two-hour meeting with Mr Putin.

Secretary of State Mike Pompeo is due to testify before the Senate next week about the summit.

Media captionTrump says he “misspoke” at Putin summit, but is it too late? Anthony Zurcher explains

Nancy Pelosi, Democratic leader in the House of Representatives, tried on Tuesday to stage a symbolic vote to support the findings of Russian interference, but was blocked by Republicans.

Senators Jeff Flake and Chris Coons, an Arizona Republican and a Delaware Democrat, are reportedly working on a nonbinding resolution to endorse the intelligence committee’s findings.

But Texas Republican John Cornyn said the Senate should focus on “additional sanctions instead of just some messaging exercise”.

What did Trump say at the summit?

During a news conference after Monday’s summit, Mr Trump was asked about alleged Russian meddling in the US election.

According to a transcript posted by the White House, he said: “My people came to me… they said they think it’s Russia. I have President Putin; he just said it’s not Russia. I will say this: I don’t see any reason why it would be.”

The summit comments sparked a barrage of criticism from lawmakers across the political spectrum, with many calling on him to correct himself.

On Tuesday, Mr Trump said he had reviewed the transcript and realised he needed to clarify.

“The sentence should have been: ‘I don’t see any reason why I wouldn’t’ or ‘why it wouldn’t be Russia’. Sort of a double negative.”

Mr Trump said that the interference had had no impact on the election, in which he defeated Hillary Clinton.

However, he did not respond when reporters asked him if he would condemn Mr Putin.