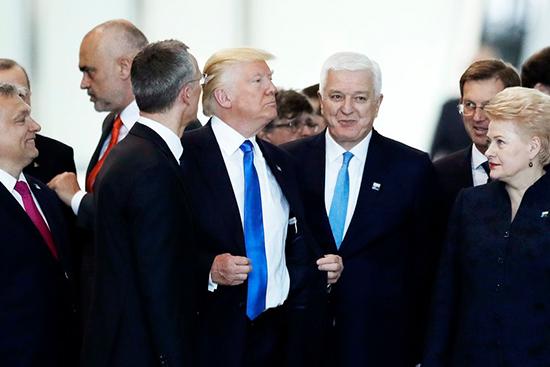 President Donald Trump raised eyebrows Tuesday night when he questioned a key provision of the NATO alliance that requires member states to treat an attack on one as an attack on all, and to respond accordingly.

It wasn’t the first time Trump appeared skeptical of NATO’s core promise, a position unthinkable for any U.S. President since the organization was started in 1949. But his comments garnered widespread around given Trump’s recent and controversial bonhomie towards Russian President Vladimir Putin.

During an interview with Fox News’ Tucker Carlson, the anchor asked Trump about his opinion on Article 5, NATO’s joint defense agreement, in relation to NATO’s newest member. “So, let’s say Montenegro, which joined [NATO] last year, is attacked, why should my son go to Montenegro to defend it from attack? Why is that?” Carlson asked Trump.

“I understand what you’re saying. I’ve asked the same question,” Trump replied. “Montenegro is a tiny country with very strong people. They have very aggressive people. They may get aggressive and congratulations, you’re in World War III, now I understand that. But that’s the way it was set up.”

Trump went on to express his dissatisfaction with the way NATO is funded, arguing it was unfair that the United States contributes more towards its defense budget than other members. “Add that to your little equation on Montenegro,” Trump told Carlson.

Trump’s skepticism towards Article 5 aligns with his distrust of multinational organizations in general, from the United Nations to the World Trade Organization. But NATO, first formed to counter potential Soviet aggression in Europe, is seen by many as a check on Russian ambitions in Eastern Europe under a leader who has demonstrated a willingness to annex territory through military might. And Montenegro, a small Balkan nation southwest of Serbia, is considered particularly vulnerable.

Some experts and commentators, then, say President Trump’s posture towards NATO, and particularly Montenegro, are disconcerting given Trump’s recent reluctance to criticize Putin.

President Trump Said Russia Is Not Targeting the U.S. Anymore, Again Contradicting His Own Advisers

“The moment you start creating some relative notion about whether we should start defending certain allies because they are small or big, then you start sowing doubt,” said Fabrice Pothier, formerly NATO’s director of policy planning. “Once more I think President Trump is doing Putin’s job.”

Republican Sen. John McCain of Arizona, a frequent critic of Trump’s behavior towards Putin, had a similar reaction.

“By attacking Montenegro and questioning our obligations under NATO, the President is playing right into Putin’s hands,” McCain wrote on Twitter Wednesday morning.

Andrew Weiss, the vice president for studies at the Carnegie Endowment for International Peace, said the President was “parroting Kremlin talking points.”

Whether or not it was intentional, singling out Montenegro was a curious choice for both Carlson and Trump. Given the size of its country — its population is under 630,000 — its invitation to NATO clearly wasn’t based on military or financial strength. Instead, it’s seen as a key geopolitical asset for the group, a check against Putin in the Russian leader’s proverbial backyard. And once a part of NATO, a country is generally believed impervious to Russian aggression, lest Putin invite the retaliation of the other member states.

“Russia interfered with our election process,” Marković told TIME’s Simon Shuster in an interview last year. “Their [security] services were in touch with politicians, with the Orthodox Church, with NGOs, with some media outlets. An environment was created in which the pro-Western forces were supposed to lose.”

In a vacuum, Trump’s comments about NATO and Montenegro might be written off as little more than a dealmaker trying to extract concessions — Trump wants member states to contribute more of their GDP to defense spending, after all. But given his controversially warm attitude towards Putin as of late, experts are questioning whether Trump is merely saber-rattling or could truly do away with a decades-old cornerstone of international relations.

“Interpreting Trump’s comments is a treacherous business, he says one thing at noon and another at 1 p.m.” said Charles Kupchan, a senior fellow at the Council on Foreign Relations who served in the Obama Administration. “But yes, if I were a member of NATO and saw the most powerful country in the alliance repeatedly question the American commitment to stand by collective defense, I would be unsettled.”