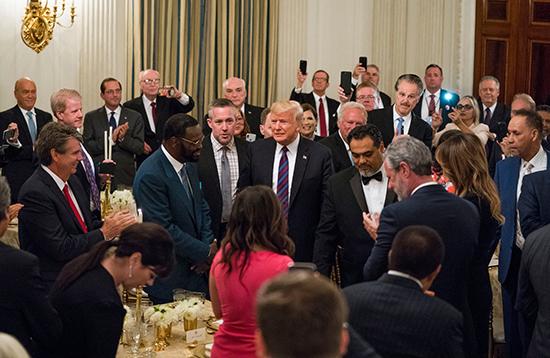 The president, who has condoned violence at his rallies, says Democrats will “violently” overturn all he has done if they prevail in the midterms.

By The Editorial Board– The New York Times

Once again, there was text and subtext, and as often with this president, both were disturbing.

At a private meeting on Monday, President Trump urged evangelical Christian leaders to break federal law and openly support him from the pulpit. Does it matter that he seemed to believe that he had overturned the provision of the tax code that prevents churches from endorsing or opposing political candidates? Truth, fantasy and deceit slosh together with Mr. Trump.

What mattered more was the thought that Mr. Trump planted — that a deluge of violence and anarchy would be loosed upon the world if they failed to rally the nation’s Christian soldiers to his side.

If the Democrats win the midterm elections, the president warned, “they will overturn everything that we’ve done and they’ll do it quickly and violently, and violently.”

Of course, the only political leader who has been inciting and condoning violence has been Mr. Trump. At campaign rallies he fantasized about punching a foe in the face and urged his crowds to “knock the crap out of” protesters, offering to pay their legal bills if they did. Reporters at his rallies have feared for their safety as they faced the “enemy of the people” fury Mr. Trump has sought to foment among his most passionate supporters. When torch-bearing neo-Nazis marched in Virginia last year, and one even ran his car into a crowd of counter-demonstrators, killing a woman, Mr. Trump said there was “blame on both sides.”

While Mr. Trump tried to terrify the ministers with the threat of “antifa” or anti-fascist activists who occasionally disrupt right-wing demonstrations, we can safely say the president’s real fear is not that tiny group of violent provocateurs, but democracy itself — the millions of Americans who have been quietly going to the polls to reject him and the candidates he supports and may continue to do so in midterm elections this fall.

At least some of the president’s evangelical followers seem inclined to march behind him as to war.

“Now we have a warrior at the helm who is willing to stand up and fight,” one minister told him. “Sir, I commend you for your courage.”

Most Americans appear not to have bought his line. Republicans may well be terrified of what they will face in November, but Democrats have been nominating reasonable candidates who seem well-suited to their districts. None that we know of is calling for postelection violence, win or lose.

The prospect of their success is what’s most terrifying to the man who told the world, “I alone can fix” the political system. A Democratic Congress would hold him to account for how badly he’s damaged that system.

To stave off that threat he has lied, stoked racial and ethnic fears and, now, raised the specter of violence.

We’ve seen this before, just not, for a very long time, in the United States.