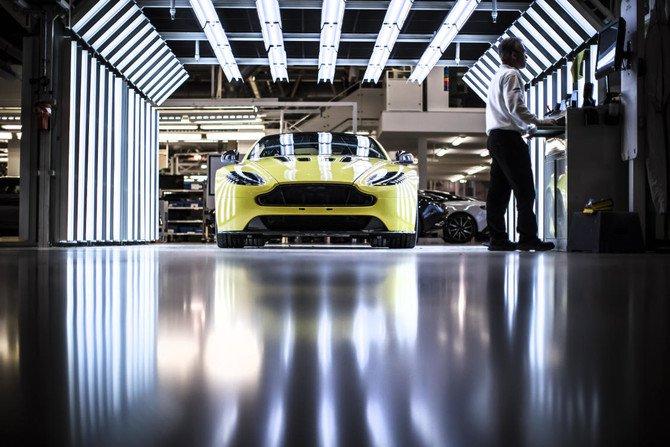 LONDON: Luxury carmaker Aston Martin plans to float on the London Stock Exchange, completing a turnaround for the once perennially loss-making company that could now be valued at up to £5 billion ($6.4 billion).
The 105-year old firm, famed for making the sports car driven by fictional secret agent James Bond, would become the first British carmaker to list in London for years, following the sale of brands such as Jaguar and Bentley to foreign owners.
The initial public offering (IPO), which follows Italian rival Ferrari’s New York flotation in 2015, could see Aston valued at up to £5 billion, sources have told Reuters, after it expanded its model line-up and production.
The firm, which last year made its first profit since 2010 and has gone bankrupt seven times in its history, said on Wednesday the IPO would involve a sale of shares by its main owners, Kuwaiti and Italian private equity groups, with at least 25 percent of the stock to be floated.
It said it had filed a registration document with Britain’s Financial Conduct Authority, a requirement for firms considering an IPO, at a time when the likes of Tesla boss Elon Musk have slammed the additional pressures of being listed.
Pending a final decision, a prospectus will be published on or around Sept. 20 as the maker of sports cars that can cost hundreds of thousands of pounds hopes to tap into global demand from wealthy buyers who want a slice of the high-end brand.
The carmaker hopes to complete the flotation this year, the same target that British Prime Minister Theresa May is working towards to agree a deal for leaving the EU.
Aston sells roughly 25 percent of its cars to the EU and operates its only plant in Gaydon, central England, with a second one due to begin operations in Wales in 2019.
“We can demonstrate that Brexit is not a major effect for us,” Chief Executive Andy Palmer told Reuters.
“If there is a tariff into Europe, it’s countered by a tariff into the UK for our competitors so you might lose a little bit of market share in the EU but you pick it up in the UK,” he said.
Niche carmakers such as Aston and McLaren are more concerned about customs checks than tariffs as they believe many of their buyers can absorb a price hike.
Like many British-based carmakers, it imports parts from Europe including German-made engines, which could face delays at ports in the event Britain crashes out of the EU without a deal. Palmer said the firm had increased its stock in preparation for any eventuality.
Aston Martin, which has licensed its name for use on apartment blocks and even a submarine, hopes to follow Ferrari by using its exclusivity to appeal to investors.
Aston, which forecasts full-year volumes will rise to between 6,200 and 6,400 vehicles, aims in 2019 to match its recent sales high of roughly 7,300 cars achieved in 2007, just before the financial crisis.
The firm then languished for several years as sales slumped and it failed to invest adequately in new models, spending most of 2014 without a boss before Palmer’s appointment.
Since then, the firm’s main shareholders have invested £200 million as part of a plan to update its model line-up, produce new lower emissions vehicles and make its first sport utility vehicle (SUV), which is due next year.
It projects volumes will reach nearly 10,000 units in 2020.
Italian group Investindustrial, Kuwait’s Investment Dar and five-percent shareholder Daimler, will retain stakes in the firm after the IPO.
Aston made half-year adjusted pretax profit of £42 million, as revenue rose 8 percent to £445 million due to strong demand for its DB11 coupe and Volante models.
The company has suggested for years it would eventually go public, but Palmer said now was the right time as the firm gears up for further growth with its move into the popular SUV market.
“We’ve got a very solid balance sheet now, very solid results. As we move into the third phase, which is the portfolio expansion, it also means we’ve got plenty of runway in front of us,” he told Reuters.