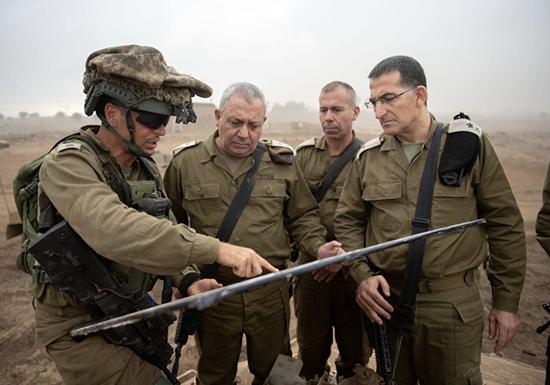 According to IDF assessments, Hezbollah has increased its military capabilities due to its fighting in Syria, and has spread its troops across the entire Middle East.

During the meeting with Del Col, who took over command since the beginning of August from Irish Army Maj.-Gen. Michael Beary, Eisenkot called on UNIFIL to increase its presence against Hezbollah, Israel Hayom reported.

The meeting with Eisenkot came two weeks after Del Col met with top Lebanese officials in Beirut in his first official meeting as UNIFIL force commander and head of the peacekeeping mission.

According to UNIFIL, during the meetings with the Lebanese officials, Del Col discussed Lebanon’s security and political situation, the implementation of UNIFIL’s mandate under UN Security Council Resolution 1701, as well as the situation in UNIFIL’s designated area of operations in south Lebanon, with special focus on continued strong cooperation between UNIFIL and the Lebanese Army.

Israel and Hezbollah fought a deadly 34-day war in 2006 that came to an end under UN Security Council Resolution 1701, which called for disarmament of Hezbollah, for withdrawal of the Israeli army from Lebanon, and for the deployment of the Lebanese army and an enlarged UN force in the south.

While the border has seen relative quiet since 2006, Beary was often criticized by Israel for failing to halt Hezbollah’s military buildup between the border fence and the Litani River because its soldiers cannot conduct searches inside buildings in south Lebanon without a legal search warrant.

According to Eisenkot, while UNIFIL is helping maintain calm in southern Lebanon, its leadership does not do enough when Hezbollah violates the resolution. Eisenkot has accused Hezbollah of continuing to prepare themselves for war in villages, cities and towns south of the Litani River, by “arming itself with more lethal and accurate weapons to harm the Israeli home front.”

According to IDF assessments, Hezbollah has increased its military capabilities due to its fighting in Syria, and has spread its troops across the entire Middle East. In addition to a massive arsenal of rockets and missiles, Hezbollah is able to mobilize close to 30,000 fighters and has flouted its tunnel system, complete with ventilation, electricity and rocket launchers.

Some 200 villages in south Lebanon have also been turned into “military strongholds,” from which Hezbollah militants are able to watch Israeli soldiers at any moment.

The IDF has accused the Shi’ite terror organization numerous times of violating the resolution which set the terms to end the Second Lebanon War.

Last year, the IDF revealed that Hezbollah has been establishing observation posts under the guise of a NGO “Green Without Borders” near the UN-demarcated Blue Line bordering Lebanon and Israel since April, presumably to gather intelligence.

While Israel’s accusations were denied by the UN, the army released footage of Hezbollah members gathering intelligence on Israel, saying the group continues to use the NGO as a front for intelligence gathering to harm Israel, and that it “is able to maintain the secrecy of its intentions while avoiding UNIFIL criticism by warnings from the Lebanese army.”

Officials in Israel’s defense establishment have warned that the Lebanese army has lost its independence and became an “integral part” of Hezbollah’s network, and the next war on Israel’s northern border will not be confined to one front, but will see conflict with both Syria and Lebanon.