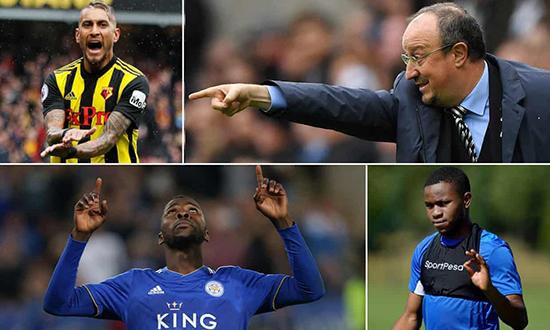 Iheanacho looks to impress, what now for Mourinho’s shambolic defence and no change for Rafa at Man City

1) Iheanacho has his chance to impress against Liverpool

Despite not dropping a point or conceding a goal, Liverpool have yet to really hit their stride in the current campaign. West Ham took very little beating in their opener, while subsequent victories over Crystal Palace and Brighton were a mite laboured. An away trip to Leicester on Saturday lunchtime should provide another reasonably stiff test ahead of what is likely to be a more challenging trip to Tottenham Hotspur after the international break. Leicester clearly missed the searing pace of the suspended Jamie Vardy against Southampton and Kelechi Iheanacho struggled to impress in his role as replacement. The striker got off the mark for the season against Fleetwood Town in the Carabao Cup on Tuesday and with Vardy sitting out the last instalment of a three-match ban , he needs a big performance against the – thus far – impregnable two-man portcullis that is Virgil van Dijk and Joe Gomez, if he is to stake any sort of claim for keeping Vardy out upon his return. BG

2) Wolves might be able to overrun West Ham in midfield

West Ham are feeling a bit better about life after their Carabao Cup win over the 10 men of AFC Wimbledon, but it will not be easy for them to back up their first competitive victory under Manuel Pellegrini when Wolves visit the London Stadium on Saturday afternoon. While Wolves only have two points from their first three games, they earned plaudits for their brave approach in last week’s home draw with Manchester City, and the newly promoted side could earn their first league win if Ruben Neves and Joao Moutinho undermine Pellegrini’s suggestion that Jack Wilshere could become the East End’s answer to Andrea Pirlo. West Ham have suffered in midfield so far and a fourth consecutive defeat would see them equal their wretched start under Avram Grant in 2010. They finished bottom that season. JS

Amid all the ongoing hoop-la surrounding Manchester United’s defeat at the hands of Tottenham Hotspur and José Mourinho’s subsequent post-match meltdown, it is easy to forget that for long periods of the game Manchester United actually played quite well. Their players created chances and moved with a sense of speed and urgency that was conspicuous by its absence in what was an embarrassingly sluggish performance in defeat against Brighton. There is, however, little or no getting away from the fact that their defence is a shambles and that Mourinho’s first choice rearguard is comprised mainly of defenders playing for other teams. Of those he has at his disposal, Jamie Carragher and Gary Neville could scarcely have been blunter in their assessment of Phil Jones, Chris Smalling and Victor Lindelof on Monday Night Football, while the sight of Ander Herrera in a back three left them and everyone else – including, possibly, Herrera – totally flabbergasted. Whether or not Burnley are good enough to take advantage of this chaos remains to be seen, but it will be difficult for Sean Dyche to plan how best to do so when he, like the rest of us, has little idea what or who exactly his players will be up against. BG

4) Will Emery find space for Özil against Cardiff?

The official line from Arsenal was that Mesut Özil was absent because of illness when they secured their first win of the Unai Emery era by beating West Ham. Yet that was accompanied by whispers of Emery clashing with Özil before the West Ham game and it will be fascinating to see if Arsenal’s manager finds space for the German in his starting 11 against Cardiff City on Sunday. The sense that Emery will not indulge the midfielder as much as Arsène Wenger did will grow if Özil, who signed a three-and-a-half year contract worth £350,000 a week in February, finds himself on the bench at the Cardiff City Stadium. JS

Goals and lots of them, is this previewer’s prediction for the encounter between Chelsea and Bournemouth at Stamford Bridge, although who’ll score the majority of them is anyone’s guess. Despite winning their opening three games, scoring no fewer than eight goals in the process, Chelsea’s defending has at times been little short of slapstick and the in-form Josh King and Callum Wilson will be rubbing their hands with glee at the prospect of running at David Luiz and Antonio Rüdiger. Bournemouth have scored two goals in each of their three league games so farand banged in another three against MK Dons in the Carabao Cup. The porousness of Chelsea’s back four suggests this streak is unlikely to end before the international break. With Chelsea similarly prolific up front, this has the makings of a potential humdinger. Cue a stampede of shrewdies to the bookies, getting their money down on a scoreless draw. BG

Tottenham will have to beware Roberto Pereyra’s flashes of brilliance when they visit Vicarage Road on Sunday. Pereyra has scored three goals in Watford’s first two home games and the improving Argentinian, who has struggled for consistency and fitness since leaving Juventus in 2016, has played a major role in his side’s immaculate start to the season. Yet Tottenham have also started with three wins and they will pose Javi Gracia’s side their toughest test so far, not least because Mauricio Pochettino has his own bewitching South American to call upon. Outstanding in the 3-0 win at Old Trafford, Lucas Moura has given Pochettino’s attack an even sharper edge. JS

7) Saints could take a roughhouse approach to stopping Zaha

Southampton were Crystal Palace’s first opponents under Roy Hodgson after Frank De Boer’s ill-fated spell in charge at Selhurst Park last season and emerged victorious courtesy of an early Steven Davis goal. Christian Benteke’s wretched form has been documented at length in previous editions of this column and elsewhere and having replaced him as a substitute three times already this season, the Norwegian striker Alexander Sorloth staked his claim for a start in Palace’s starting line-up by scoring the only goal of the game against Swansea City in the Carabao Cup earlier this week. If Southampton can shackle Wilfred Zaha, they’ll go a long way towards shackling the entire Palace team. Extremely aggressive as a player, Mark Hughes will no doubt have noticed the systematic fouling employed by Watford in what proved an ultimately futile effort to keep the winger quiet last Sunday. These roughhouse tactics did work for over an hour, however, which may prompt Hughes to instruct his Saints to turn sinners for the afternoon. Following calls for more protection for Zaha from his manager, team-mates and assorted pundits, Saturday’s match referee Martin Atkinson may become the latest to incur the increasingly tedious wrath of Hughes. BG

Everton entertain Huddersfield without Richarlison, who is suspended following his moment of petulance against Bournemouth last weekend. The 21-year-old Brazilian has been hugely influential for the Toffees so far this season, earning himself an international call-up in the process, but Marco Silva must now plan without him for two Premier League games. Richarlison’s impetuousness could have a big bearing on the future of Ademola Lookman, who has been angling for a move away from the club before the European transfer window closes today due to his frustration at a lack of first-team opportunities. With his fellow wingers Nikola Vlasic and Yannick Bolasie out on loan, now that a short-term opportunity has presented itself, the youngster’s hopes of securing a move to RB Leipzig look to have been stymied until January at earliest. BG

9) Fulham give Jokanovic a test of his talents

Slavisa Jokanovic’s decision to change his entire starting eleven for Tuesday night’s Carabao Cup win over Exeter City has given him something of a selection headache ahead of Fulham’s visit to Brighton. Summer signings Alfie Mawson and Sergio Rico made accomplished debuts, while Ryan Sessegnon, Aboubakar Kamara and Stefan Johansen also earned plaudits, with Jokanovic admitting several of his fringe players have given him plenty to think about. Having made so many apparently shrewd purchases over the summer to swell the ranks ahead of life in the Premier League, he’ll be pleased to see the players who helped secure promotion are not prepared to give up their first team places without a fight. His efforts to keep everyone happy will be a test of his talents as a manager, but for now it is a pleasant problem for him to have. BG

Three matches in and Newcastle already look to be in a battle for survival, even if there is no particular shame in losing to Tottenham and Chelsea, or failing to take all three points against Cardiff City. Next up is a trip to Manchester City and it’s difficult to imagine Rafael Benítez will change the negative tactics that earned him and his side so much opprobrium last weekend against Chelsea. As awful as Newcastle were to watch, their approach almost worked and it would be exceptionally naïve to think Benitez will kow-tow to critics, order his players to buckle their swashes, play an expansive game that seems to be beyond their collective skill set against such accomplished opposition and risk getting thrashed. A pragmatist who is trying to make the best use of the limited tools made available to him while working with one hand tied behind his back, Benítez will try and probably fail to come away from the Etihad Stadium with a point. Wolves have proved City are not infallible, but despite being new to the Premier League, serious summer investment means they already look far more well equipped to stay in it than Newcastle’s comparatively motley crew. BG