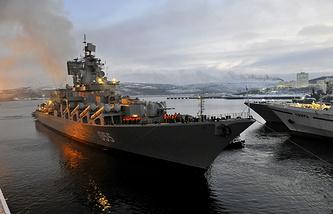 “In the course of this event, the grouping will practice a set of tasks of anti-submarine warfare and anti-aircraft defense, maritime communications protection, countering piracy and rendering assistance to ships in distress, as well as practical rocket and artillery fire,” the admiral said.

He noted that the exercises of the grouping of forces of the Russian Navy and Aerospace Forces at the Mediterranean Sea will be held for the first time in the modern history of Russia.

According to him, the exercises will involve two submarines, 34 aircraft, 26 combat vessels and ships. Northern Fleet’s Marshal Ustinov missile cruiser will lead the naval task force participating in the drills, Korolev said.

Russia will hold drills in the Mediterranean Sea on September 1-8.

The Russian Defense Ministry said earlier that for the purpose of ensuring the safety of shipping and flights, the areas covered by the drills will be declared dangerous for navigation and flights in advance, in accordance with international legislation.