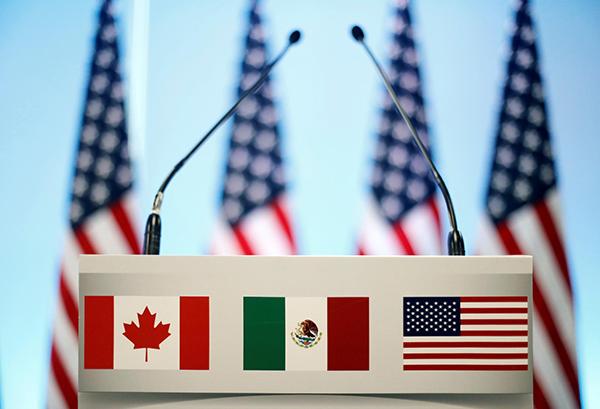 WASHINGTON (Reuters) – Top NAFTA negotiators from Canada and the United States worked late into the night Thursday to resolve final differences to meet a Friday deadline, with their Mexican counterpart on standby to rejoin the talks soon.

Despite some contentious issues still on the table, the increasingly positive tone contrasted with U.S. President Donald Trump’s harsh criticism of Canada in recent weeks, raising hopes that the year-long talks on the North American Free Trade Agreement will conclude soon with a trilateral deal.

“Canada’s going to make a deal at some point. It may be by Friday or it may be within a period of time,” U.S. President Donald Trump told Bloomberg Television. “I think we’re close to a deal.”

Freeland left the USTR building on Thursday night and said she had a “long, intensive conversation” with Lighthizer, adding that she would later return for her fourth meeting that day.

“We covered a lot of ground,” she said. “The atmosphere remains constructive. There’s a lot of goodwill.”

Negotiations entered a crucial phase this week after the United States and Mexico announced a bilateral deal on Monday, setting autos content rules and paving the way for Canada to rejoin talks to modernize the 1994 accord that underpins over $1 trillion in annual trade.

The NAFTA deal that is taking shape would likely strengthen North America as a manufacturing base by making it more costly for automakers to import a large share of vehicle parts from outside the region.

The automotive content provisions, the most contentious topic, could accelerate a shift of parts-making away from China.

A new chapter governing the digital economy, along with stronger intellectual property, labor and environmental standards could also work to the benefit of U.S. companies, helping Trump to fulfill his campaign promise of creating more American jobs.

Trump has set a Friday deadline for the three countries to reach an agreement, which would allow Mexican President Enrique Pena Nieto to sign it before he leaves office at the end of November. Under U.S. law, Trump must wait 90 days before signing the pact.

The U.S. president has warned he could try to proceed with a deal with Mexico alone and levy tariffs on Canadian-made cars if Ottawa does not come on board, although U.S. lawmakers have said ratifying a bilateral deal would not be easy.

One sticking point for Canada is the U.S. effort to dump the Chapter 19 dispute-resolution mechanism that hinders the United States from pursuing anti-dumping and anti-subsidy cases. Lighthizer said on Monday that Mexico had agreed to eliminate the mechanism.

Trump also wants a NAFTA deal that eliminates dairy tariffs of up to 300 percent that he argues are hurting U.S. farmers, an important political base for Republicans.

But any concessions to Washington by Ottawa is likely to upset Canadian dairy farmers, who have an outsized influence in Canadian politics, with their concentration in the provinces of Ontario and Quebec.

“Ultimately, we’ve got huge issues that are still to be resolved,” said Jerry Dias, head of Canada’s influential Unifor labor union. “Either we’re going to be trading partners or we’re going to fight.”