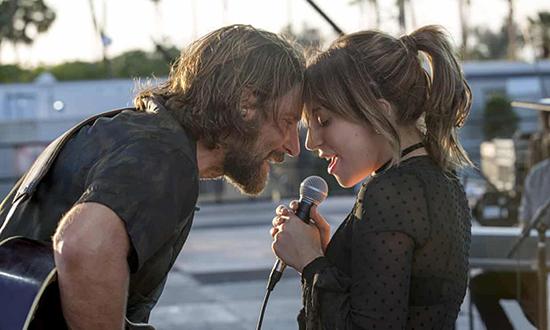 It’s the romantic epic of male sacrificial woundedness and it’s been regenerating like Doctor Who. We had it in 1976 with Barbra Streisand and Kris Kristofferson, in 1954 with Judy Garland and James Mason and originally way back in 1937 with Janet Gaynor and Fredric March. It’s even been regenerating obliquely in movies such as The Artist and La La Land. Now Bradley Cooper plays the boozy and downwardly mobile alpha-star laying his pride on the showbiz altar of the woman he loves. Cooper directs and co-stars in this outrageously watchable and colossally enjoyable new version, supercharged with dilithium crystals of pure melodrama. He appears opposite a sensationally good Lady Gaga, whose ability to be part ordinary person, part extraterrestrial celebrity empress functions at the highest level at all times.

Here is the heart-wrenching gallantry of the grumpy, drunken singing star teetering over the apex of his fame, who discovers an unconventionally beautiful, talented young woman – single-handedly launching her on a glorious career while his own spirals downwards, redeeming his own former arrogance with this magnificently selfless act. He must accept the fate of being the embarrassing loser and has-been, finally not even allowed to be the wind beneath her wings.

Cooper and veteran screenwriter Eric Roth are clearly inspired most directly by the Streisand/Kristofferson film. But in those closeups that Cooper awards himself, and his huge moments of emotional agony … well, he’s channelling a bit of Judy. He certainly de-machos the role, and creates a backstory of vulnerability. Yet the crunch question is: how are Lady Gaga and Bradley Cooper going to reinvent that terrifying award-ceremony scene, when he embarrasses her publicly? Well, the climax of their ordeal is bigger than I ever thought possible. It’s the final station of the cross.

Cooper takes his voice down a couple of octaves to play Jackson Maine, a gravel-toned MOR country-rocker doing stadium tours and keeping it together with huge amounts of booze and pills. He’s still a big success, but personally and emotionally he’s running on empty. (Cooper actually co-writes a few of his songs here, and his band is played by Neil Young’s longtime backing group: Lukas Nelson & Promise of the Real.) He’s also suffering from encroaching deafness and tinnitus, which periodically bring him close to anxiety attacks and temper tantrums. He has to be shepherded by his manager and older brother, Bobby, played by Sam Elliott, for whom he has longstanding feelings of resentment, rivalry and guilt.

Out of booze after a show one night, Jackson has his driver pull over when he spots what turns out to be a drag bar, where the boss lets a woman sing in non-drag: this is the extraordinarily talented Ally (Lady Gaga), who socks over a killer version of La Vie En Rose. Jackson is stunned, as well he might be. They have an adventure together and Ally’s unimpressed attitude to celebrity and her vocational attitude to music entrances Jackson. He falls deeply in love, even showing up at the family home, where she mortifyingly still lives with her dad, played by Andrew Dice Clay. Jackson finally gets her up on stage with him for a duet, and her greatness is obvious, but a dark shadow falls when she is approached by creepy Brit talent manager Rez (Rafi Gavron), under whose tutelage Ally seriously blows up. She is writer, singer, dancer and sex bomb. Poor Jackson is fame 1.0 and he realises Ally is fame 2.0, and the crunch comes when he is humiliatingly bumped from a promised opening slot at the Grammys, singing a tribute cover to Roy Orbison – of all the tellingly obsolete bygone stars. Ally, meanwhile, is up for three awards that very same evening.

Cooper is arguably prettier than Lady Gaga, but she is the one who commands your attention: that sharp, quizzical, leonine, mesmeric face – an uningratiating face, very different from the wide-eyed openness of Streisand or Garland. (Weirdly, she rather more resembles Marta Heflin, playing the groupie-slash-interviewer who went to bed with Kristofferson in ’76.) Her songs are gorgeous and the ingenuous openness of her scenes with Jackson are wonderfully sympathetic. Meanwhile Cooper, whose screen persona can so often be bland and unchallenging, makes precisely this conservative tendency work for him in the role. He is so sad you want to hug him. Arguably, this film fudges some of Jackson’s dark side, by giving him partial deafness as well as alcoholism, but it is still a richly sympathetic spectacle.

For all that it’s hokum, this film alludes tactlessly to something pretty real. It could be called: A Star Is Dying. The new generation supplants the existing one. For one star to get an award, a handful of defeated nominees have to swallow their pain, as the spotlight moves away from them. For one star to deliver the shock of the new, another one has to receive the shock of the old. A Star Is Born turns that transaction into a love story.

Olivia Williams: ‘I’ve been close enough to stardom to see how horrifying it is’