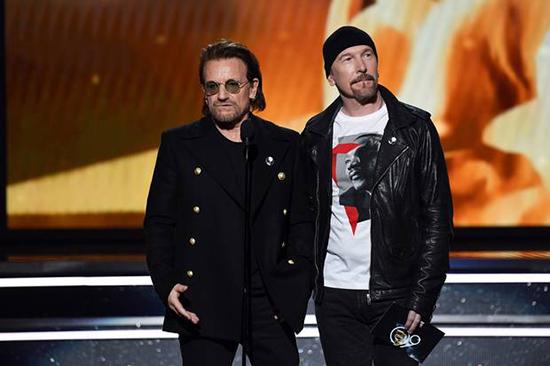 BONO has said he is “happy and relieved that anything serious has been ruled out” after he was forced to abandon a U2 gig mid-concert when he lost his voice.

The rockers were thrilling the crowd in Berlin when Bono‘s distinctive voice started to fade.

He struggled with vocal issues through “Red Flag Day” and “Beautiful Day” before telling the crowd he couldn’t continue, fans said.

The Dubliner released a statement on U2’s official website this evening, updating his followers about his health.

“I’ve seen a great doctor and with his care I’ll be back to full voice for the rest of the tour. So happy and relieved that anything serious has been ruled out.

“My relief is tempered by the knowledge that the Berlin audience were so inconvenienced. There was an amazing atmosphere in the house, it was going to be one of those unforgettable nights but not for this reason…

“We can’t wait to get back there on November 13th,” the One singer said.

According to reports, the singer appeared “visibly distressed” as he suffered “a complete loss of voice” after performing a handful of songs at the Mercedes Benz Arena in Berlin.

“We’re so sorry for tonight’s cancellation,” the band wrote in a statement on their website.

“Bono was in great form and great voice prior to the show and we were all looking forward to the second night in Berlin, but after a few songs, he suffered a complete loss of voice.”

The band said that they don’t know what happened, but they’re taking medical advice on the issue. The statement was signed by all band members except Bono.

The Mercedes Benz Arena, where U2 performed August 31 and September 1 as part of its experience+innocence tour, tweeted: “Get well soon, Bono.”