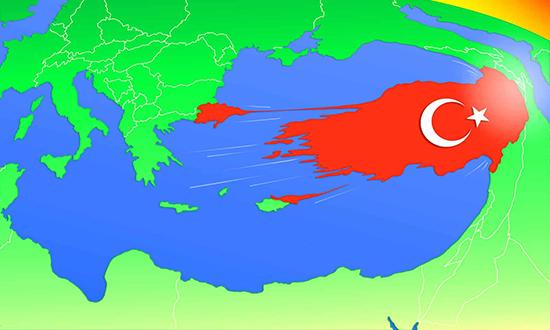 Many Turks are passionate about democracy and civic rights – and amid Erdoğan’s rhetoric, they should not be overlooked

Growing up in Turkey, every weekend I would gather with friends and family to watch a western. John Wayne spoke fluent Turkish back then, Clint Eastwood uttered his laconic replies in an Istanbul dialect. Those cowboy towns with their bleak landscapes might just as well have been somewhere in Anatolia, they were so familiar. When the US television series Dallas first came to Turkey it created a ripple of excitement that lasted for years. There would be no one on the streets in the evenings when it was being screened. We were a nation hooked on the saga of the Ewing family. My grandmother put a curse on JR, the scheming, sneaky oil tycoon – we all hated him with a passion. But we never saw him as an “American” or a “westerner”.

And that’s what strikes me most when I look back: the absence of anti-western, anti-European sentiment. Part of that is because Turkey, unlike Algeria or Morocco, has not been colonised. We have no collective memory of colonialism. In fact back then, Turks generally thought we were part of the west, part of Europe, even though most Europeans had yet to acknowledge it. That naive and optimistic Turkey does not exist any more.

Over the years my motherland has become increasingly isolationist, inward-looking and anti-European. Together with the government’s blatant authoritarianism there has been a rise in ultra-nationalism and religious fundamentalism. This has inevitably led to an increase in sexism and gender inequality. Violence against women has escalated dramatically, with a 25% increase in killings last year. At schools, on the streets, the next generation is subject to the rhetoric of reactionary ethno-nationalism and rightwing populism. The state of emergency following the attempted coup against President Recep Tayyip Erdoğan may have ended – but there has been no return to normal.

Last week TRT, Turkey’s state-run TV station, announced that it would no longer broadcast cowboy movies. It is the latest development in the continuing Turkey-US row, which led Donald Trump’s administration to impose financial sanctions on its Nato ally. The measures sent the Turkish lira, already weakened by the AK party’s economic policies and Turkey’s anti-democratic turn, plummeting to record lows. In response, Erdoğan asked the whole nation to boycott US electronic goods. “If they have the iPhone, there is Samsung elsewhere. We have Vestel [a Turkish manufacuturer],” he said. The government has also asked people to convert dollars into Turkish lira. Throughout August, almost every day, pro-government TV channels and newspapers have informed us of the “exemplary citizens” finding ingenious ways to protest against America, and the west as a whole. A father in Adana, a city in the south, publicly burned his children’s US passports. An ultranationalist group demonstrating in the same city burned US dollars in front of TV cameras. Afterwards their spokesman said, “we will overcome this crisis. We will make the priest an imam” – a reference to the US pastor Andrew Brunson who had been kept in prison for two years and was then moved to house arrest. In Muğla, in the south-west, Ferhat Dolar applied to court to have his family surname changed.

The jingoistic hysteria is not shared by all Turkish citizens – these showy examples taking to the streets are clearly in the minority. But in a country where the opposition is censored and suppressed, it is people burning things and changing names who are covered by the media. Anyone who openly refuses to take part in the spectacle is called a traitor.

A massive cultural change is taking place, and it manifests itself in small everyday details. We are being pushed into an artificial tribalism and we are being told that ethnically, religiously and historically, we are completely distinct from the west. We will never be one of them. Culture has become the new battleground. Secularism fades as the number of religious schools rises; evolution has been purged from the new school curriculum; education has been reshaped along religious and nationalistic lines. Erdoğan has been explicit: he wants “to raise a pious generation”.

The French president, Emmanuel Macron, brands Turkey anti-European. “President Erdoğan’s Turkey is not President Mustafa Kemal Atatürk’s Turkey any more,” he said. But Turkey’s slide into anti-westernism will have negative consequences for “us” and “them” alike. That is the challenge for European politicians – it does not only concern Turkey, but the increasing number of countries where democracy is either wobbly or wounded.

There has to be a new approach that is openly and unwaveringly critical of all authoritarian governments and their shameful record on human rights, democracy and freedom of speech. But at the same time we all must embrace the civil societies of those countries where people are struggling under the direst circumstances. For as much as Erdoğan and his ilk present themselves as mere spokespeople for the will of their people, we need to see the difference between the elite and the general population in undemocratic countries. Isolating these lands and pushing them away from western norms will only play into the hands of isolationists. The Islamists and nationalists in Turkey do not want the country to be part of the European Union – they only benefit from escalating tension.

And while this international drama plays out, Turkey’s journalists, human rights activists and civic leaders are put on trial, exiled or imprisoned. Osman Kavala, well-respected and known for his work for peaceful coexistence, is still in jail on baseless charges. Likewise the opposition leader Selahattin Demirtaş remains unlawfully imprisoned. Novelist and columnist Ahmet Altan has been sentenced to life without parole. Turkey has become the world’s biggest jailer of journalists, surpassing even China’s sad record.

On 25 August, the mothers’ vigil, a peaceful demonstration that has been organised every weekend for more than a decade to remind the nation of the hundreds of citizens who have “disappeared” under police custody, was dispersed by brutal police force. More than 20 people were detained. The Kurdish-majority HDP party co-chair Pervin Buldan said: “They created a country that is afraid of mother’s silent cries.”

Turkey is changing, sliding backwards in every way. Led by an undercurrent of government-sponsored chauvinism and xenophobia, it is sailing away from the west and away from Europe. But still, civil society resists. There are countless citizens in Turkey – women, students, minorities – whose voices we do not hear, yet they continue to passionately support and defend pluralistic democracy. They are still there. We are still there. This is what “the west” should not fail to see.