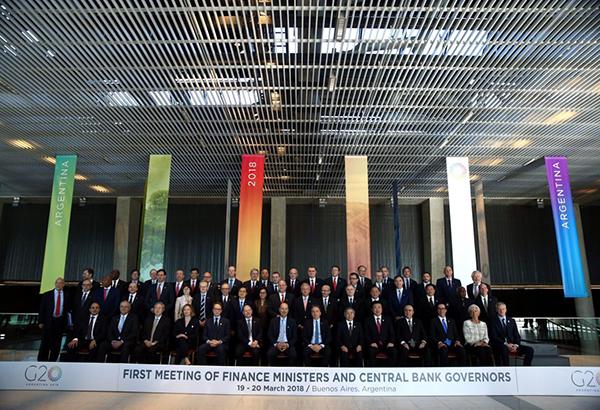 By Kunihiko Yasue / Yomiuri Shimbun Staff Writer The framework of the Group of 20 major countries and regions (G20, see below), which was pivotal in containing the crisis brought about by the collapse of Lehman Brothers in autumn 2008, has been questioned anew. The G20 needs a strategy to win over the administration of U.S. President Donald Trump, which values problem-solving through bilateral rather than multilateral negotiations.

The G20 meeting of finance ministers and central bank governors took place on July 21 and 22 in Buenos Aires, the capital of Argentina. Discussions were held on major agenda items such as trade friction between the United States and China and currency devaluation in emerging economies (see below), along with discussions on the state of the G20 itself. The latter topic was proposed by Argentina, which holds the current G20 presidency, 10 years after the collapse of Lehman Brothers.

Japan was represented at the meeting by Finance Minister Taro Aso, who made an appeal on the importance of the G20, saying it “has a role in fostering a shared awareness of the state of the world economy and its risks, and in serving to nip potential crises in the bud.”

In the face of the 2008 financial crisis, the G20 was successful in gaining the cooperation of all member countries and regions and formulating large-scale economic countermeasures for economic recovery, in order to restore the stability of the global financial system, which centers on the United States. However, once it had emerged from crisis mode, which lasted until about 2009, conflicts of interest emerged between member states and the G20 found itself unable to produce appreciable results.

Commenting on how the debate over the G20 framework came about, a person related to the Japanese government explained that “there is an awareness of the need to address the role of the G20 in ordinary times, now that the world economy is some distance from a crisis situation.”

Cooperation within the Group of Seven, which includes the United States, Japan, Britain, France and Germany, has also come to a standstill. This is because the Trump administration, which was inaugurated in 2017, has completely turned its back on this framework of international cooperation, which the United States originally led with Europe.

In response, the Japanese government, which will assume the G20 presidency in 2019, is preparing plans to revitalize the G20 so as to draw the United States back into the framework. It is considering making the topic of correcting imbalances in the world economy its main agenda for discussion.

The person related to the government stressed that “the imbalances cannot be corrected only through bilateral trade relations, and should be addressed on a global level.” The government considers the G20, which includes emerging economies such as China, India, and Brazil, to be an appropriate framework to tackle these imbalances.

Imbalances in the global economy, where various countries’ current account deficits or surpluses become excessive, is a problem that the G20 has been tackling for some time. It was reflected in the U.S. housing bubble, which was a remote factor in the collapse of Lehman Brothers. One of the causes of the bubble was investment funds flowing into the United States — which then saw its current account deficit balloon due to excessive consumption — from countries such as China, which was running a massive current account surplus due to factors such as exports to the United States.

At the 2010 G20 meeting of finance ministers and central bank governors in South Korea, the United States and other countries proposed setting target values to keep current account balances within 4 percent of gross domestic product. However, the proposal was opposed by countries such as Germany and China, which had current account surpluses of over 4 percent of GDP at the time, and an agreement was never reached. Subsequent concrete measures were half-hearted at best and the imbalance in current account balances continues to this day (see chart 1).

The problem of current account balances came into sharp focus once again last month, when the Turkish lira plummeted in that nation’s financial crisis. Turkey is a G20 member nation.

A statement issued by July’s G20 meeting warned about the problem of depreciating currencies in emerging economies, saying that “many emerging market economies … face challenges including market volatility and reversal of capital flows.” A mere 20 or so days after the close of the meeting, tensions between the United States and Turkey intensified around the detention of a U.S. pastor in Turkey, which triggered the Turkish lira crisis, resulting in a shake-up of financial markets.

That Turkey’s deficit in its current account balance was a problem had already been recognized. With very few strong export industries, Turkey is reliant on external financing to make up for its deficit, making the country prone to economic instability. There were definitely fertile grounds for the outflow of funds.

The G20 was founded on the initiative of countries such as the United States in response to the 1997 Asian financial crisis. At that time, the G7 already existed as a framework for discussion on the international economy and finance, and for policy coordination. However, as many emerging economies with vulnerable financial systems were hit hard in the financial crisis, a decision to create a system incorporating such economies was made in order to avoid a chain of crises.

G20 member countries are not decided solely on the basis of economic scale; for instance, they do not include countries such as Spain, whose GDP is in the top 20 globally. Issues such as geography and political conditions are also taken into account. For example, Indonesia and Saudi Arabia were chosen based on their positions as representatives of Islamic nations. From 1999 onward, finance ministers and governors of central banks regularly held discussions. However, the results of these talks were poor and had an increasingly diminished impact.

The G20 returned to the spotlight when the United States made use of the existing framework to gain cooperation from emerging economies as a quick fix for the Lehman Brothers-induced financial crisis. The first G20 leaders summit took place in Washington in November 2008, and the third G20 summit in September 2009 was treated as a top-level meeting to discuss the international economy. The summits became regular events from then on (see chart 2).

The problem of imbalance

Trump sees the vast U.S. trade deficit — the reason for the country’s current account deficit becoming a normal state of affairs — as a problem and is thus attacking it. He argues the unfairness of the outflow of U.S. wealth to other countries affects the American people. The International Monetary Fund’s Economic Counsellor and Director of Research Maurice Obstfeld points out that “the persistence of global imbalances … are fueling protectionist sentiment … [B]oth surplus and deficit countries must work together to reduce excess global imbalances in a manner supportive of global growth and stability.”

The G20 economies account for about 90 percent of the world’s GDP (see chart 3).

In basic terms, if highly effective policy decisions can be reached by the G20, they will hold great power. The G20 needs to be tenacious in appealing to the United States about the importance of working on measures to solve the fundamental problem of how to correct the imbalance.

The Group of Twenty is an international forum consisting of 7 advanced economies including Japan, the United States, and Germany; the European Union; and 12 emerging economies. The emerging economies include China, Russia, India, Argentina, Saudi Arabia, and Indonesia. The heads of state and finance ministers of G20 nations meet regularly to discuss world problems, particularly in the economic arena.

This refers to the outflow of finances to other countries from an emerging economy — which may be facing issues in areas such as politics or economic structure — resulting in a sudden drop in the value of its currency. The cause is thought to lie in investment capital being transferred to the United States, with its long-term interest rates on an upward trend due to economic expansion. As depreciation advances, the emerging economy experiences increasing inflation as prices for imported goods rise, resulting in damage to its economic activity. Financial markets tend to become unstable when the number of such emerging economies increases.