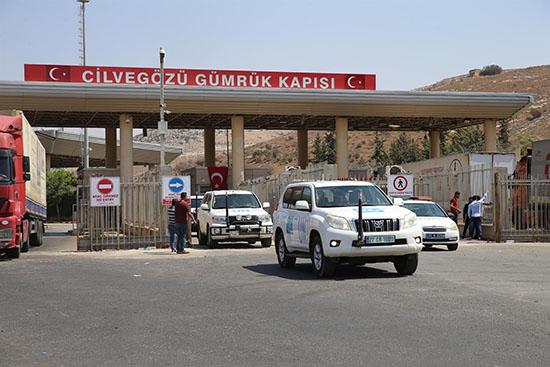 The looming battle for Idlib in northwestern Syria has hit a number of Turkish businessmen who export products to companies in Syrian opposition’s last stronghold.

Businessman Salih Arslan told Demirören News Agency on Sept. 1 that Turkish firms exported various products, including iron, cement, sunflower, vegetables and fruits to Idlib, but Syrian merchants have failed to pay them $7 million due to the current situation in the Syrian province.

Syrian opposition fighters blew up bridges Aug. 31 and dug trenches around their bases to impede an anticipated ground offensive by the regime. They also called on residents to take up arms and support front-line fighters.

“We can’t collect our money now. Their total debt has reached $7 million. Syrians say they can’t pay in cash, so they are offering us barter,” the Turkish businessman said, adding that Syrian firms in other areas including Afrin, Azaz and Sarmada also failed to pay their recent dues.

As a result, Turkish companies have applied to Turkey’s Trade Ministry to allow them to import goods from Syria in exchange of their exports.

“The ministry had issued us import permits back in July 2017, when Syrian businessmen also struggled to pay in cash then,” Arslan explained.

Turkey could import Syrian spieces, cotton and some metal products in exchange of Syrians’ debt, he argued, describing the current situation as “very grave because nothing else has been left to do.”

Thousands of government troops and allied fighters have been amassing in areas surrounding Idlib. Russia has said a military operation there is necessary to weed out “terrorists” it blames for attacking its bases on the coast.

Unlike other areas that have been reclaimed by recent government offensives, Idlib is not totally besieged. Its borders with Turkey and adjacent territories administered by Turkishtroops are open, allowing in fuel, produce and other products. But trade with government-controlled areas has been stunted as rebel-operated crossings have been blocked by the government since mid-August.

Some residents say they are feeling the pinch.

Bassam Abu Bashir, an anesthesiologist, told AFP that fuel is already in short supply in Maaret al-Numan where he lives after having been displaced from eastern Ghouta near Damascus earlier this year following a military campaign in the seven-year-old war.

Bracing for a new onslaught, he said he is looking to relocate his 12-member extended family to Afrin, a nearby town administered by Turkish authorities and its Syrian allies. But transportation and rent are costly. “The rent is nearly a $100 and I need to pay six months in advance. Otherwise, camps for displaced people are our only option,” he said.

Turkey working with Russia, Iran to prevent another Aleppo disaster in Idlib: Erdoğan Turkey has intensified contacts with Russia and Iran in recent days amid escalating tension over the impending military operation in Idlib.

The U.N. worries that the offensive could force 2.5 million people toward the Turkishborder.

“We are conducting joint work with the Russians and Iranians on Idlib to prevent another Aleppo disaster,” Erdoğan said during a Victory Day reception at the presidential palace in Ankara on Aug. 30.

Thousands of refugees had fled to Turkey after the regime assault targeting Aleppo in 2016.

An offensive is likely to first strike southwest Idlib and al-Ghab plains, which overlook the coastal area where Russia has its military and naval bases. Another front for the offensive is from the south and southeast, which would restore government control over an essential highway that runs between Syria’s major cities.

The area, controlled by rebels since 2015, has been targeted by government and Russia strikes for months, leaving its infrastructure, schools and hospitals in desperate conditions.