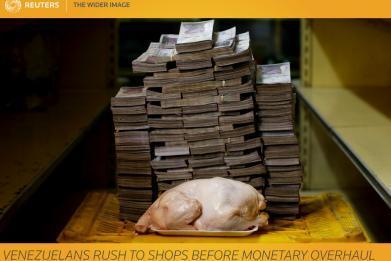 In an interview with Univision 23 in Miami earlier this week translated from Spanish to English, Rubio, a vocal opponent of Maduro’s regime, said he would not rule the military option out.

“For months and years, I wanted the solution in Venezuela to be a non-military and peaceful solution, simply to restore democracy,” Rubio said. “I believe that the Armed Forces of the United States are only used in the event of a threat to national security. I believe that there is a very strong argument that can be made at this time that  Venezuela and the Maduro regime has become a threat to the region and even to the United States.”

But critics of U.S. military action say it’s a bad idea. A better solution would be a “multilateral solution that involves some kind of negotiations,” said Juan Cruz, a CIA veteran and director for Western Hemisphere Affairs at the National Security Council.

Geoff Ramsey, the assistant director for Advocacy for Human Rights in the Americas’ Venezuela program, otherwise known as WOLA, told Newsweek that even threatening military action as a solution to a complex crisis is not the answer. He believed Rubio is likely speaking to a select constituent base in Miami and that U.S. aid to Venezuela needs to focus on negotiated solutions.

“Threatening military action risks derailing diplomatic progress and spreads false hope among the extremist voices in the Venezuelan opposition that they don’t have to do the hard work of building a coalition and leadership structure,” Ramsey said. “They think the U.S. will invade and deliver the country on a silver platter. It’s a fantasy.”

Rubio’s office did not immediately respond on Saturday to a request for comment from Newsweek about the ongoing Venezuelan crisis. Rubio has been a longtime critic of the Venezuelan government.

“Venezuela was a democracy with a constitution, and a national assembly and a court,” Rubio said in May. “All of that’s been wiped out by a dictator. Every day it gets worse and worse, right here in our own hemisphere.” They are sponsoring and protecting narco traffickers. They are flooding their neighboring countries, including Colombia, with refugees and people seeking refuge from Venezuela.”

Maduro, an authoritarian leader who many compare, in style at least, to Donald Trump, has presided over an economic crisis. The International Monetary Fund projected in July that inflation would hit one million percent this year. The economy crashed in 2014 after the price of oil left the country struggling to subsidize the price of bare necessities for its people.

Items like toilet paper, tomatoes and chicken were placed in front of bolivars, the currency used in Venezuela, to represent the current inflation crisis. Just days after the IMF’s projection of record inflation rates, the government knocked five zeros off the end of its currency.

“The idea that the Venezuelan crisis is a national security threat is not a position shared by the majority of Venezuelans or even among leaders of the Venezuelan opposition itself,” Ramsey said. “The solution needs to be some combination of the current international strategy of pairing multilateral pressure on the Venezuelan government through sanctions … paired with engagement that leads to fair elections.”

Correction: This story originally quoted Ramsey as saying “pressured with impeachment” instead of “paired with engagement.” This has now been corrected.