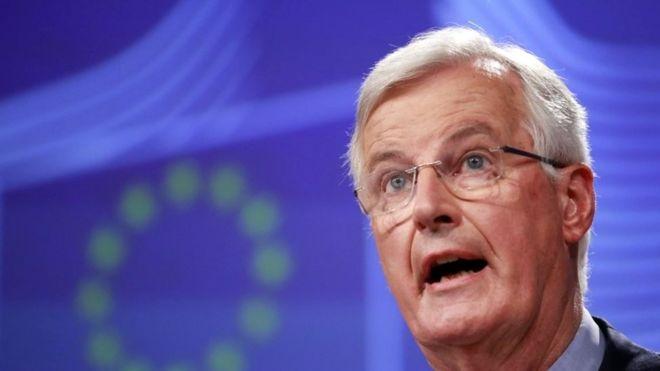 The EU’s chief Brexit negotiator Michel Barnier has said he is “strongly” opposed to key parts of Theresa May’s proposals for a future trade deal.

This morning the prime minister said she would not compromise on the UK government’s Chequers plan.

But Mr Barnier said plans for a “common rulebook” for goods but not services were not in the EU’s interests.

“Our own ecosystem has grown over decades,” he said. “You can not play with it by picking pieces.”

While he has previously expressed criticism about Mrs May’s Chequers plan, sources close to Mr Barnier told the BBC he has not been this explicit before.

In response, the UK government insisted its plans were “precise and pragmatic” and would work for the UK and the EU.

The negotiations between the UK and the EU have an informal October deadline, but Mr Barnier said this could be extended to mid-November.

In an interview with the German newspaper Frankfurter Allgemeine Zeitung, Mr Barnier said Mrs May’s plans “would be the end of the single market and the European project”.

“The British have a choice,” he said.

“They could stay in the single market, like Norway, which is also not a member of the EU – but they would then have to take over all the associated rules and contributions to European solidarity. It is your choice.

“But if we let the British pick the raisins out of our rules, that would have serious consequences.

“Then all sorts of other third countries could insist that we offer them the same benefits.”

He said another problem was that many goods now come with services attached – meaning they were hard to separate in a trade deal.

“We have a coherent market for goods, services, capital and people – our own ecosystem that has grown over decades,” he said.

“You can not play with it by picking pieces. There is another reason why I strongly oppose the British proposal.

“There are services in every product. In your mobile phone, for example, it is 20 to 40 percent of the total value.”

Mr Barnier’s comments were published on the same day Mrs May wrote in the Sunday Telegraph that she was “confident” a “good deal” could be reached.

But she said it was right for the government to prepare for a no-deal scenario – even though this would create “real challenges for both the UK and the EU” in some sectors.

Foreign Secretary Jeremy Hunt has warned a no-deal Brexit would be a “big mistake for Europe”, although Britain “would survive and prosper”.

Various business groups have warned about the possible impact on the UK of no-deal Brexit.

The World Trade Organization – under whose rules the EU and UK would trade if no deal was agreed – said it “would not be end of the world… but it’s not going to be a walk in the park”.

Responding to Mr Barnier’s remarks, a government spokeswoman said: “We are confident that we have put forward a proposal that is precise, pragmatic and that will work for the UK and the EU.

“This proposal achieves a new balance of rights and obligations that fulfils our joint ambition to establish a deep and special partnership once the UK has left the EU while preserving the constitutional integrity of the UK. There is no other proposal that does that.

“Our negotiating teams have upped the intensity, and we continue to move at pace to reach – as Mr Barnier says – an ambitious partnership, which will work in the mutual interests of citizens and businesses in the UK and in the EU.”

The so-called Chequers plan was agreed at the prime minister’s country residence in July. It led to the resignations of Brexit Secretary David Davis and Foreign Secretary Boris Johnson.

Mr Barnier has previously criticised the proposals, ruling out allowing the UK to collect customs duties on behalf of the EU.

The UK is due to leave the EU on 29 March but has yet to agree how its final relationship with the bloc will work.