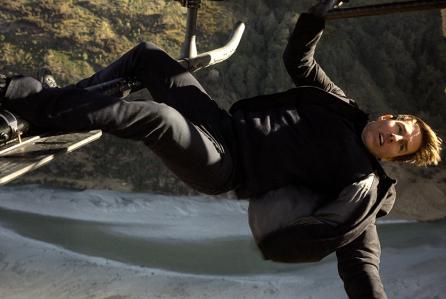 UPDATE, writethru: After cruising into China on Friday with the biggest opening day for the franchise, Mission: Impossible – Fallout jumped to a three-day launch of $77.3M. That’s a new Middle Kingdom record for the series, and for star Tom Cruise. It’s also 84% higher than Mission: Impossible – Rogue Nation, which itself was a record-setter in 2015.

The full international box office weekend on Fallout was $89.1M in 65 markets to lift the overseas total to $442.7M. Globally, the Paramount Pictures/Skydance film has a running cume of $649M and is looking at a finish upwards of $750M.

In China, where M:I6 has marketing and financial backing from Alibaba Pictures, the movie also set an August IMAX record of $7.4M. Cruise & Co have some Middle Kingdom runway ahead with strong word of mouth and no major competition immediately in sight.

Fallout naturally took some of the sting out of Disney/Marvel’s Ant-Man And The Wasp which was last weekend’s China champ. But that hasn’t stopped the sequel from surpassing the entire lifetimes of the original Ant-Man, as well as Captain America: Winter Soldier, Guardians Of The Galaxy Vol 2 and Black Panther in that market. The global cume is now buzzing at $595M.

Also in the billion-dollar+ club, Disney/Pixar’s Incredibles 2 has become the No. 2 animated movie ever at the global box office — with Italy and Germany still to open.

And, as expected, Warner Bros’ Crazy Rich Asians had a crazy good start in Australia to land the all-time best debut for a romcom and the studio’s best 2018 opening weekend in the market.

Overall, the frame across the Top 5 studio releases overseas was down just a touch over 1% from last weekend, and up 88% on last year to continue the recent positive trend. For the summer period May 5-August 28, 2018, international box office in comScore reported markets was $8.53B versus $8.5B in the comparable range last year.

Next weekend sees Warner Bros look to continue its recent wins with The Nun in a day-and-date release outside a handful of majors and including a healthy IMAX component.

Breakdowns on the films above and more have been updated below; box office is slightly abridged this weekend due to the ongoing Venice Film Festival.

In its 6th weekend of offshore play, Fallout jumped into China with a franchise record debut of $77.3M. The action-packed Paramount Pictures/Skydance sixquel also gave Tom Cruise his biggest opening ever in the market where it played at 8,716 locations.

The highly-praised movie has financial backing from Alibaba Pictures and gets a marketing assist in the Middle Kingdom. Cruise visited Beijing last week to prime audiences and the word of mouth has been very positive.

There is little in the way of Fallout in the coming China frames and legs are expected to be muscular. It bowed 84% bigger than 2015’s Mission: Impossible – Rogue Nation which set 2D records. Fallout is also in 3D. The IMAX score in China was a record for August at $7.4M.

Also new this session were Italy and Greece. In the former, Fallout topped Rogue Nation by 4% with $2.7M. The latter was 20% above at $397K.

Warner Bros/Gravity Pictures’ shark continues to bite with another $17.7M in 66 markets and on about 10,639 screens. In offshore waters, the prehistoric colossus has grossed $342.3M for $462.8M worldwide.

ANT-MAN AND THE WASP

The Japan debut is 48% ahead of the original Ant-Man and landed it as the top Western title this weekend. In China, where it debuted last session, the Disney/Marvel sequel crossed $100M — and the lifetimes of Ant-Man, Captain America: Winter Soldier, Guardians Of The Galaxy Vol 2 and Black Panther.

Warner Bros’ phenomenon opened in Australia this weekend where it had a great debut as the all-time best launch for a romantic comedy. Including sneaks on 477 screens, the opening was a clear $5.4M No. 1 and also delivered the best WB bow of the year.

Oz was expected to perform as it’s thought CRA will lean into English-speaking offshore hubs, particularly those with a significant Asian population; the UK is up on September 14.

On Friday, HT3 became Sony’s biggest animated film of all time globally, passing the previous entry in the franchise with $485.9M. In total, the series has grossed over $1.3B worldwide. On an $11.8M weekend, HT3 rose to $323.3M internationally.

Ahead of release in Poland, its final market, HT3 was in 63 this session. Italy held the top spot for a $10.4M cume after two frames.

Sony’s Denzel Washington sequel clocked another $10M in 49 markets this session. The itnernational cume is now $62.4M. Taiwan was a No. 1 launch with $1.1M, which is double the original. Central America and Thailand also bowed No. 1. Holdover markets were down 43%. Russia and Italy are on deck this month followed by Japan in October.

The Parr family is now 12 weekends in to offshore play with Italy and Germany still to come. This session, the superheroes powered $9.6M in 28 markets for an overseas cume of $562.5M and a global take of $1,163.5M.

This weekend saw Incredibles 2 get off to strong starts in Denmark, Finland and Sweden. Sweden grossed $1.6M to score the 2nd highest grossing animated 3-day opening of all time behind only Frozen. Denmark opened to $1.2M; the biggest Pixar 4-day bow there. Finland was worth $700K — the 2nd best 3-day Disney Animation/Pixar opening.

In the best holds, the UK dipped 40% and has now hit $80M after seven frames. Japan dropped just 13% for $5M to date. Chile debuted at $137K — 79% above the previous movie. Italy and Switzerland open next weekend.