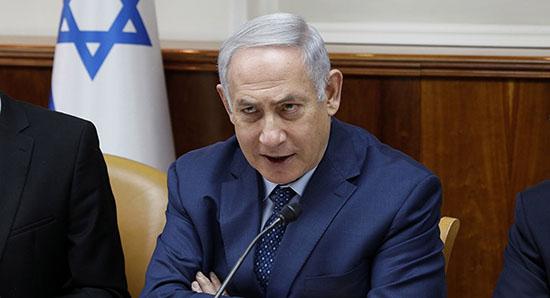 Netanyahu told the families “there would be no arrangement in the Gaza Strip without the return of the boys.”

Israel won’t agree to a cease-fire deal with Hamas in Gaza without the return of the remains of the two missing soldiers who are presumed dead, Prime Minister Benjamin Netanyahu said.

He issued a statement after he met for the first time in five months with the parents of Hadar Goldin and Oron Shaul, who are believed to have been killed during the 2014 Gaza War but whose bodies still remain in Gaza.

Netanyahu told the families “there would be no arrangement in the Gaza Strip without the return of the boys.”

His words were vague, as it was unclear if he also meant to include three Israeli captives being held in Gaza. Nor was he specific about what type of an agreement the return is contingent upon.

Israel already has an understanding with Hamas that quiet would be met with quiet, restoring an element of calm to Hamas-Israel tensions, which over the summer had seemed at times to threaten breaking out into another war. This includes the Palestinian launching of rockets and incendiary devices from Gaza into Israel.

The United Nations, together with Egypt, is working on a long-term truce that would include the reconciliation of Hamas and Fatah and the return of the Palestinian Authority to Gaza. Hamas has ruled Gaza since it ousted Fatah in a bloody coup in 2007.

The Goldin family has warned the Israeli public that the terms of the deal are already set, and that they do not include the return of the two families’ sons.

“We were disappointed with the meeting with the prime minister,” Hadar’s parents Simcha and Leah Goldin said in a statement to the media after the meeting. “Netanyahu continues to surrender to Hamas.”

Netanyahu refused to link the rehabilitation of Gaza with the return of Hadar and Oron, the Goldin family said.

“Our son Hadar was kidnapped into a tunnel in Rafah during a cease-fire,” the Goldin family said. “Now, four years after the abduction, Netanyahu has not demanded the return of our son and again agrees to a cease-fire, which Hamas can break at its choosing by abducting additional soldiers. We left the meeting today with a feeling that behind the prime minister’s statements that he and his government are doing everything possible to return Hadar, there is a sad reality that nothing has happened.”

Kan News reported that Shin Bet head Nadav Argaman has held a number of meetings with Palestinian Authority President Mahmoud Abbas to urge him to support the reconciliation process with Hamas.