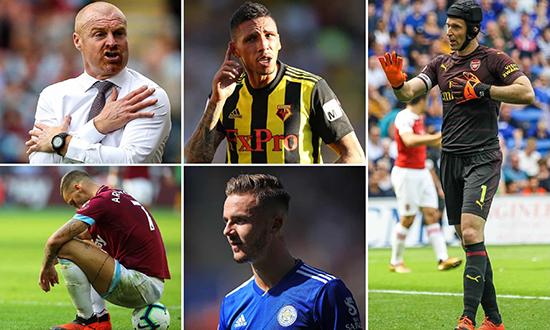 Unai Emery must have known the question was coming, and the answer, a bit like Petr Cech’s goalkeeping, was not wholly convincing. Arsenal’s manager was asked after their victory over Cardiff whether he is still confident that Cech, at the age of 36, can develop and adapt to the style of play that he is determined to introduce, namely passing the ball out from the back at every opportunity. Cech had looked uncomfortable with the ball at his feet against Manchester City, prompting the manager to be quizzed about whether he would turn to Bernd Leno, the new No 2 from Germany, and that debate is unlikely to go away after another afternoon that threatened to turn into an ordeal for Cech. Either Emery needs to change his tactics or his goalkeeper, because it is hard to see Cech turning into Ederson at this stage of his career. Stuart James

The penny has dropped at Chelsea. Maurizio Sarri’s desire for his players to swarm forward, pressing high and moving the ball at pace, has been impressed upon them over the head coach’s first seven weeks in charge and, as the majority of his squad depart on international duty and he concentrates on moving into a new home (his dog, Ciro, has now joined him as company), progress is evident. The players corrected their own shortcomings from the first half against Bournemouth. “We could have moved the ball quicker,” said Eden Hazard. “He doesn’t like it when we just keep the ball at the back. He wants it moving forward quicker, us pressing higher.” Eddie Howe’s side made that difficult, but the hosts prevailed to ensure ambitions for the campaign are lofty. “We want to be champions,” added the Belgian. First impressions are positive. Dominic Fifield

The Premier League’s two leading assist-makers are both left-backs. While one is not that much of a surprise (Manchester City’s Benjamin Mendy), the other is: José Holebas of Watford. The former Greece international delivered two sublime crosses from a free-kick and corner to bamboozle a shoddily organised Tottenham defence and take his season tally to four. From a defensive point of view, he also limited the influence of Kieran Trippier. The 34-year-old in many ways symbolises a mishmash of a squad with few household names but an identity founded on determination. That is credit to the work of Javi Gracia but also to Holebas’s own competitiveness, helping prove – for now at least given their propensity to drift in the second half of the season – that Watford’s “band of mercenaries” tag is unfair. James Piercy

4) Time for Burnley to focus on the league

One point from four games, only three goals scored and nine conceded for Sean Dyche’s Burnley, who are second-bottom going into the international break. This is not yet a crisis but lose at Wolves in a fortnight and the manager will have to start considering a Plan B, and expect to come under serious scrutiny regarding why the wheels are falling off. Dyche’s men barely threatened against a United side low on confidence. This is cause for alarm for the manager although post-match he exuded a calm that will be needed to turn their fortunes around. Burnley’s season started six weeks ago in the Europa League so there is no excuse for being under-prepared. They went out of Europe on Thursday to Olympiakos, so Dyche and his team can now concentrate on the Premier League. After their terrible start that may be for the best. Jamie Jackson

When Richarlison picked up his daft red card at Bournemouth, the Everton support consoled themselves with the thought that he would only actually miss home games against Huddersfield and West Ham. The implication being that Everton might be able to win those games without him. Wrong. Huddersfield were livelier in attack than Everton, though that is not saying a great deal. No one had any individual spark of creativity or productive understanding with teammates. Not Gylfi Sigurdsson, not Tom Davies, not Theo Walcott and not even Ademola Lookman when he was sent on in search of a winner. Everton should spend the international break introducing themselves to each other. West Ham will probably be doing the same, and a visit from the bottom club might be just what Everton need. Paul Wilson

It has not taken long for West Ham’s summer optimism to drain away. Despite spending £100m on nine new players, they have lost their opening four fixtures for the first time since 2010-11. Avram Grant took them down that year and that historical precedent means that the Premier League’s bottom side cannot be complacent about their awful start, even though Manuel Pellegrini insisted that it is too early to panic. “We cannot talk about relegation when we have just played four games,” West Ham’s manager said. But his team’s laboured performance against Wolves, who snatched the points when Adama Traoré punished Carlos Sánchez’s late howler, heightened the sense of foreboding. There was no drive in midfield or cohesion in attack and the suffering will continue if West Ham do not improve after the international break. Jacob Steinberg

7) Maddison looks a star in the making

James Maddison’s first season at Leicester is already going better than his first season at Norwich. After his move to Carrow Road from Coventry in 2016, great things were expected, but he made only three appearances for the Canaries and ended up on loan to Aberdeen. Attitude issues were a concern but the following summer he knuckled down, and last season became the best No 10 in the Championship. He already looks at home in the Premier League, that early arrogance tempered by something closer to healthy confidence, which he showed against Liverpool. Not everything he tried worked but the key was that he kept trying. The best players have an ability to forget previous mistakes, so their heads are clear for the next time. Maddison might not be among the best just yet but he does appear to have that quality. Leicester have a gem. Nick Miller

The time when he was being touted for an England place is surely now passed but Glenn Murray continues to be a beacon of hope for strikers toiling away in the lower divisions. The player who started his career bouncing between the likes of Workington, Wilmington Hammerheads, Barrow, Carlisle, Stockport and Rochdale only seems to be improving as his 35th birthday approaches. His two goals rescued a lost cause against Fulham. The first came after a typically intelligent run and cool finish, while the second saw him assume penalty responsibilities after Pascal Gross had missed Brighton’s earlier spot-kick. Where Gross failed through trying to be too clever by half, Murray, faithfully upholding the unpretentious values of the workhorse lower-league centre-forward, simply thrashed the ball into the net. John Brewin

Crystal Palace came down to earth with a bump. The composed, athletic football that had steered them clear of relegation last season was strikingly absent (actually, it was being played by Southampton). Instead there was uncertainty and a lack of determination. It’s not that Palace were bad, but they received a reminder that they cannot expect to win if they are at something other than their best. “People are building us up, I don’t want to be built up,” was the way Roy Hodgson put it. “I still think we’re one of those teams that will have to be looking over our shoulder.” With a small squad, largely reinforced with rejects from other clubs, Palace do not have many options other than those available on Saturday. A fit Wilfried Zaha is a must, of course, but others will have to step up too. A goal from Christian Benteke would be nice. Paul MacInnes

10) Benítez holds it together at Newcastle

Whether or not you feel the backs-to-the-wall tactics Rafa Benítez has employed during Newcastle’s fiendish start to the season are a bit much, a point of agreement must be that he is doing a superhuman job in holding everything together. His players are certainly on board. “This is the manager’s idea but we all back him and believe in him,” Mohamed Diamé said after the 2-1 defeat at Manchester City. It was interesting to hear Benítez talk about the extra responsibility their current plight piles onto those in his position. “Because I was on both sides, I know how important the manager is for these teams,” he said, comparing the difficult spell he endured managing minnows Extremadura with the comparative ease of passing on instructions at Real Madrid. His task at Newcastle bears a closer resemblance to the former. Nick Ames