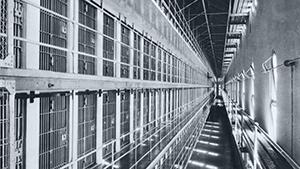 While serious prison reform in the United States has long failed there is a new force to be reckoned with from an unlikely source that should be taken seriously, says John Kiriakou.

Liberals are concerned because so many poor people and people of color are in prison. One out of every four black men in America is in prison, in jail, on probation, or on parole. The numbers are astounding. The rest of the world looks at us and shakes its collective head—especially our European allies.

The truth, though, is that prison reform and sentencing reform are not reserved for the left. In fact, evangelicals and conservatives have been leaders in the reform movement since the 1970s. Chuck Colson, who had been Richard Nixon’s special counsel and hatchet man during the Watergate years and who served eight months in a minimum-security prison for Watergate-related crimes, found his Christian faith there and created Prison Fellowship, now the oldest and largest Christian-oriented prison ministry and reform organization in the country. Its success has spawned countless similar organizations.

Prison Fellowship has become known especially for its program that sends Christmas presents to the children of indigent prisoners and for its provision of bibles and religious literature to prisoners at the federal, state, and local levels. The trend for Christian organizations involved in prison work, though, has changed over the past 20 years or so, ever since President Bill Clinton toughened the already harsh Reagan-era anti-drug laws that have filled American prisons. Now, many of those groups are advocating for legislation that would change sentences, guidelines, and in some cases, the entire system.

Most recently, Congress has twice come up with bipartisan bills that would reshape the entire federal sentencing regime. Supporters thought they had a real chance in 2014 when a bipartisan group of senators, led by Sheldon Whitehouse (D-RI) and John Cornyn (R-TX) introduced the Recidivism Reduction and Public Safety Act of 2014. The bill easily passed the Senate Judiciary Committee. A similar bill, the Smarter Sentencing Act of 2013, also passed the committee. Both bills also sailed through the House Judiciary Committee. They died on the Senate floor, though, when then-majority leader Harry Reid (D-NV) refused to call them up for a vote. A year later, the new majority leader, Mitch McConnell (R-KY) also refused to allow a vote.

Both bills, which would have eased sentencing guidelines, done away with mandatory minimum sentences for most drug crimes, and offered incentives for federal prisoners that would have allowed early release for good behavior and for taking GED or vocational classes, had the support of groups as diverse as the American Civil Liberties Union, the conservative Heritage Foundation, former prosecutors, police and prison guard organizations, victims’ advocates, prominent conservatives, and faith groups. But nothing happened.

Four years later, with Donald Trump in the White House and Republicans controlling both houses of Congress, that could change. Certainly, evangelical and conservative interest in prison and sentencing reform has not diminished. Craig DeRoche, senior vice president for advocacy and public policy at Colson’s Prison Fellowship, told Religion News Service in May, “There’s never been greater interest in America for criminal justice reform. We have a lot of hope. This administration is genuinely interested in second chances.” De Roche added that, while Prison Fellowship and other Christian organizations have worked on prison reform with every president since Jimmy Carter, the group’s access to the Trump White House is “unprecedented.” Part of the reason, he said, was that the prison population has so ballooned in the past 20 years that the issue has “touched many Christians personally.”

I would add that the driving force behind the Administration’s interest in prison and sentencing reform is presidential son-in-law Jared Kushner, whose father Charles was convicted in 2004 of 18 counts of making illegal campaign contributions, tax evasion, and witness tampering. The elder Kushner was sentenced to 24 months in prison. He served 14 months and completed his sentence in a halfway house in Newark, New Jersey. The younger Kushner has been a reform advocate ever since. And that’s where hope lies.

In May the House of Representatives passed a bipartisan prison reform bill by a vote of 360-59 that would immediately send home 4,000 prisoners, provide free sanitary napkins to all incarcerated women, outlaw shackling during childbirth, and make it easier for inmates to earn time under house arrest or in halfway houses. President Trump endorsed the bill just a few days after it passed the House.

The problem is, and has always been, in the Senate. In June, Kushner met with Cornyn and Whitehouse, as well as Reps. Doug Collins (R-GA) and Hakeem Jeffries (D-NY), to strategize on how to move the bill forward in the Senate. Senate Judiciary Committee chairman Chuck Grassley (R-IA), has his own reform bill that is more comprehensive than Kushner’s. But it runs the risk of alienating other key Republicans, including Attorney General Jeff Sessions and Trump himself. Senator Tom Cotton (R-AR) already has said that he will seek to block it.

But now there’s finally some good news. Trump has proven to be truly interested in reform. He met in early August with Republican senators and told them that he is supportive of a new reform proposal that would combine Kushner’s “First Step Act,” the Grassley proposals, and the original provisions of the 2013 and 2014 bipartisan bills. Trump told the assembled senators, “Do some work with your colleagues and let’s see where the Senate is and then come back to me with it.” That’s as far as any reform bill has gotten in a generation.

Here are the provisions as things stand now:

The bill is popular and is moving forward because of that support from evangelicals and conservatives. Conservative icon Richard Vigeurie said in the New York Times in 2013 that, “Conservatives should recognize that the entire criminal justice system is another government spending program fraught with the issues that plague all government programs. Criminal justice should be subject to the same level of skepticism and scrutiny that we apply to any other government program.” He added that three principles—public safety, compassion, and controlled government spending—lie at the core of conservative philosophy. He’s right. And it’s evangelicals who are focused on the “compassion” aspect.

All of this is great, right? But it ignores the single most important reason that people are in prison in the first place—drug abuse. The federal Bureau of Prisons has a program that’s supposed to help people get off drugs and reintegrate into society. It’s called the Residential Drug Abuse Program, or RDAP. It’s a joke. There is precious little money dedicated to RDAP. And in most prisons it consists only of 11 weekly meetings where prisoners gather to watch taped reruns of the A&E Network program “Intervention.” Seriously. That’s it. There is no counseling, no therapy, no drug education, no vocational training. Nothing. That’s where conservatives should focus. If the government isn’t going to do anything about it, shouldn’t the churches? Wouldn’t it be practical for every church in America to help one single prisoner get off drugs and learn a trade or finish a high school diploma? It would certainly be cheaper and it probably would be more efficient than the system we now have.

Overall, a lot of Congress members want to do the right thing here. Reform is truly bipartisan. The political stars have aligned. It’s time to get it done. Conservatives should push reform forward and declare victory.

John Kiriakou is a former CIA counterterrorism officer and a former senior investigator with the Senate Foreign Relations Committee. John became the sixth whistleblower indicted by the Obama administration under the Espionage Act – a law designed to punish spies. He served 23 months in prison as a result of his attempts to oppose the Bush administration’s torture program.