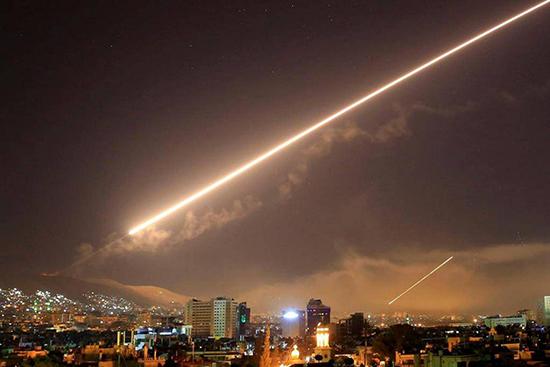 The blasts come at a tense moment, as Syrian government forces prepare to attack the last refuge of the opposition in the northwest of the country.

BEIRUT: At least two military personnel were killed and 11 wounded in overnight explosions caused by suspected Israeli strikes on a military airport on the edge of the Syrian capital, a war monitoring group said Sunday.

The Britain-based Syrian Observatory for Human Rights said the blasts that rocked Damascus resulted in several explosions in a weapons depot inside the airport. The Observatory, which relies on various sources inside Syria, said some of the wounded are in critical condition.

Syrian pro-government media initially blamed the blasts on Israel, but state media later quoted an unnamed Syrian military official as saying the explosions were caused by an electrical malfunction in a munition depot nearby.

Iran’s official IRNA news agency quoted an unnamed Syria-based Iranian military official as saying an explosion was caused by an electrical short circuit. The official denied reports that senior Syrian officials were at the site.

The Syrian government has blamed Israel for previous attacks on the airport. Israel rarely acknowledges such strikes, but has recently targeted suspected Iranian posts inside Syria.

Iran and its Lebanese ally Hezbollah have provided crucial military support to Syrian President Bashar Assad’s forces in the civil war. Israel has said it will not tolerate a permanent Iranian military presence in Syria, especially near the frontier between the two countries.