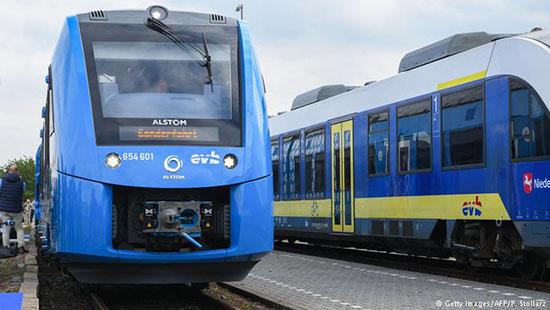 Commuters in Germany now have a chance to ride the world’s first hydrogen train as the country moves to replace old diesel-powered engines. Instead of exhaust fumes, hydrogen trains produce only water.

A French-made hydrogen train took its first scheduled trip from the station of Bremervörde in Lower Saxony on Monday, marking a world first for the new transport technology.

Two Coradia iLint engines will replace diesel trains on the 100-kilometer (62-mile) route linking the towns of Cuxhaven and Buxtehude, with 14 other hydrogen trains set to be introduced across the state by 2021. The new-type engines are produced by the French company Alstom.

“The world’s first hydrogen train is entering into commercial service and is ready for serial production,” Alstom CEO Henri Poupart-Lafarge said during the unveiling ceremony in Bremervörde, which will serve as a refueling site.

The new trains carry a hydrogen tank and fuel cells on the roof, and produce electricity by combining hydrogen and oxygen. Excess energy is stored in ion lithium batteries. The engines can run for around 1,000 kilometers without refueling and reach a maximum speed 140 kilometers per hour (87 miles per hour), similar to diesel trains.

However, unlike the older machines, hydrogen trains produce only steam and liquid water. The manufacturers claim that the new trains are also quieter and less costly to operate.

“Sure, buying a hydrogen train is somewhat more expensive than a diesel train, but it is cheaper to run,” Stefan Schrank, the project’s manager at Alstom, told the AFP news agency.

The state of Lower Saxony will pay a total of €81.3 million euro ($95 million) for the project, in line with Germany’s long-term initiative to drastically cut pollution and increase the use of renewable fuel by 2050.

Alstom says that other countries were also looking into buying their trains, including the UK, the Netherlands, Denmark, Norway, Italy and Canada.

The French government has already pledged to have its first hydrogen train on the tracks by 2022.