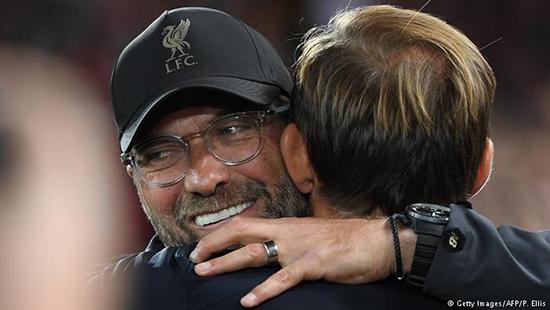 Nearly 45 minutes before kickoff, with three of Anfield’s stands all but empty, Jürgen Klopp beat his chest twice as he followed his team out of the tunnel for the warmup. Hidden, as it was, behind various Champions League-branded props, this wasn’t a gesture for show but a man geeing himself up before a big performance.

It worked. Both Klopp and his team were effervescent early on. The players snapped into every tackle, moved the ball rapidly and dominated their French visitors. And their boss was in similar form. The famous fist pump got an early outing, as James Milner slammed Neymar to the turf before Liverpool won a ninth minute throw in. Yep, a fist pump for a throw in.

As the home side continued to dominate, Klopp became more animated. His arms flailed while his hands pulled, shunted, rose, pointed and swirled like a malfunctioning assembly-line robot.

“What the boys made of the match plan was extraordinary, outstanding to be honest,” Klopp said about his side’s fearsome early display. “It looked much more confident, much more tuned than it was in the past.”

The length of a penalty box away, Klopp’s opposite number, compatriot and successor at both Borussia Dortmund and Mainz, Thomas Tuchel, stood, arms folded, wearing a thousand-yard stare above his fitted shirt and skinny trousers.

Tuchel spent the early stages sitting nervously on the sidelines, chewing gum and craning his neck to see around coaching staff on the frequent occasions the ball found was near his side’s goal. Eventually that pressure told, first through Daniel Sturridge’s 30th minute header and then, six minutes later, James Milner’s penalty. Klopp’s biceps were working overtime on those fist pumps.

Tuchel, seemingly weary of both his team and his restricted view, emerged from the safety of his dugout to stand glumly with hands in pockets until Thomas Meunier hooked in to halve the deficit. But as the half ended, his frustration got the better of him and he remonstrated angrily with his backroom staff.

The level of a coach’s touchline animation is, of course, no real way to judge how good he is at his job. But, perhaps more than any coach in the world, it is evident just how much Klopp’s touchline personality bleeds into his team. This, especially in the first hour, was a performance of exceptional energy, clear-headed decision making, unmatched desire and a demonstration of the importance of forming strong bonds — both tactically and emotionally.

While the sustained, raucous noise that has earned this ground its reputation on big European nights made it impossible for his players to hear him bellow across the pitch, the message somehow came through loud and clear. Such high-decibel levels are encouraged by the Liverpool boss, whose penchant for heavy metal football is well known.

If Klopp is most comfortable playing the high-octane rock star, pumping up the crowd and those around him, Tuchel appears much more reluctant to take center stage. His team showed their undeniable and expensive quality in flashes but offered little in the way of the intense but controlled possession football their 45-year-old boss desires until the closing stages, when Liverpool tired.

For eight minutes, those flashes looked to be enough for a point after Kylian Mbappe took advantage of the second in a pair of sloppy Mohamed Salah passes to level things up on 83 minutes. At that point, even Klopp needed a moment, taking a rare seat on the bench before replacing Salah with Xherdan Shaqiri.

Years of work paying off

Then Klopp got the kind of moment he wanted, as substitute Roberto Firmino lashed home the decider in a sensational contest. It wasn’t quite celebration time yet for Klopp, who showed his tactical nous in replacing Sadio Mane with Fabinho before PSG could kick off, to eat up those precious seconds. This time, it proved enough.

Once again, Anfield was Klopp’s stage and the jubilant Kop his adoring audience. After three years in charge, Liverpool are undeniably his team. A few months into his tenure, it’s difficult to say the same of Tuchel and PSG just yet.

“Jürgen Klopp has worked with his team for [three] years. This is what Liverpool do, they press you and make it hard for you in possession,” Tuchel said in his post-match press conference.

Tuchel expanded on the theme later on, going so far as to clarify his English interpreter’s version of the words he spoke in French. “A lot of what Liverpool do is second nature, it’s automatic to them,” he said.

Minutes earlier, on the way back down the tunnel, Klopp beat his chest six times before flashing that beaming smile. This one wasn’t just for him.