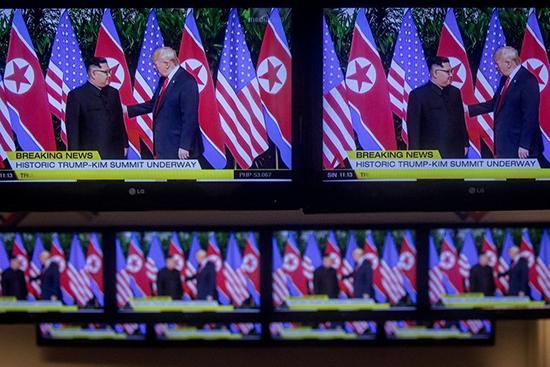 After his last trip to Pyongyang in July, Secretary of State Mike Pompeo knew that Washington’s efforts to dismantle North Korea’s nuclear program were flailing. Kim Jong Un had snubbed Pompeo on the trip, visiting a potato farm outside the capital and leaving him to meet with deputies powerless to make any decisions. Just over a month later, Trump canceled Pompeo’s next scheduled visit. “I feel we are not making sufficient progress,” he said. It had taken just two months for the glow of the president’s historic Singapore summit with Kim to fade, and Trump’s legion of critics in the foreign policy establishment were gleeful: “Stunt diplomacy” had failed.

Now, it seems that assessment may have been premature. In early September, Kim sent a letter to Trump, delivered from the demilitarized zone marking the North-South border in Korea. The White House has not divulged the contents of the note, but the South Koreans—who met with the North Korean leader in advance of their own summit in Pyongyang on September 18—hinted at the message in a recent statement. Kim, said a South Korean special envoy, has “unwavering trust” in President Trump, and wants to achieve the denuclearization of the Korean Peninsula “before Trump finishes his first term.”

Unsurprisingly, the flattery worked. “Kim Jong Un of North Korea proclaims ‘unwavering faith in President Trump.’ Thank you to Chairman Kim,” Trump tweeted. “We will get it done together!” Now the administration says it’s considering making preparations for another meeting between Trump and Kim. Such a summit, according to a White House aide not authorized to speak publicly, could be the best way to prevent U.S.–North Korea relations from reverting to the “fire and fury” hostility of 2017. Might the North actually move toward denuclearization, as the South Koreans say Kim suggested? Or is the U.S. being played?

Have I got a deal for you! Donald Trump at the Singapore Summit. Could he still save the North Korea denuclearization deal? Win McNamee/Getty Images

It’s no secret where Trump’s national security adviser, John Bolton, comes down. He believes the steps Pyongyang has taken to date—the partial dismantling of a nuclear test site and the suspension of missile tests—are cosmetic, and he doesn’t want the U.S. to ease up on sanctions until the North takes far more serious steps to dismantle its nuclear capability. He also wants the U.S. to again pressure China and Russia to revive their sanctions against the North; the countries lifted them in the wake of the June summit.

But South Korean sources, both inside and outside the government, believe the Trump administration risks badly misreading the overtures from the North. That’s why Seoul is scrambling to keep what one foreign ministry official there calls the “spirit of Singapore” alive. On September 18, South Korean President Moon Jae-in and Kim opened a three-day summit in Pyongyang, discussing denuclearization, security arrangements and humanitarian issues. Before setting off from Seoul, Moon told reporters that if this meeting—the third between the two leaders (and the first in the North Korean capital)—“paves the way for the [next] round of talks between Chairman Kim and President Trump, then the summit will be a great success.”

Among the voices who say Kim is ready to bargain: the highest-ranking North Korean defector, a senior member of the ruling party whose family was very close to the Kim clan in Pyongyang. In his first ever interview with Western media (the South Korean government does not want his identity revealed for security reasons), he told Newsweek that Kim wants to do two things: ensure “regime security” for the North Korean government, and put his nation on the path toward “national economic prosperity,” of the sort that eastern Asian nations from South Korea to Japan and Taiwan earned in the second half of the 20th century. Kim, says the defector, “wants a big deal with Trump,” in which the U.S. signs a treaty formally ending the Korean War and normalizes relations with Pyongyang in return for full “denuclearization.”

The Moon administration, through its dealings thus far with Kim, agrees with this assessment. Though left-leaning and thus viewed, in the prism of South Korean politics, as “soft” on the North, the Moon government is not naïve. It believes a deal is there to be had—provided the Trump administration understands that it has to be a deal. That is, that the U.S. stop insisting, in public and in private, that the North has to irreversibly stand down its nukes before anything else can happen.

Pyongyang thinks the “end of war declaration is a foothold, the first step in the denuclearization process,” says Cheong Seong-Chang, vice president of research planning at the Sejong Institute, a Seoul think tank, and an occasional adviser to the Moon government. “[Denuclearization] with no safety measures in place would be tantamount to getting stark naked at the negotiation table with the U.S.”

Diplomatically, this is a heavy lift. It means both sides have to agree on what they call sequencing—who’s going to do what first, and when, on a whole host of issues. Any formal peace treaty would inevitably end up involving the Chinese, who lost tens of thousands of troops in the Korean War. Skeptics of the process both in and out of the Trump administration worry that Beijing and Pyongyang could insist that any formal treaty and a normalization of relations means the U.S. has to pull its 28,000 troops out of the South.

That would be a deal-killer for Washington. But the South doesn’t necessarily believe that Kim would insist on it. “If the U.S. and North Korea make a prior agreement that [denuclearization and]…the U.S. troop presence are entirely unrelated matters, then there would be no problem later,” says Cheong. And the South Korean envoy, Chung Eun-yong, says Kim addressed the issue directly in their September 5 meeting: “A [formal] end of war declaration does not have anything to do with the weakening of the U.S.–South Korean alliance or the withdrawal of troops, does it,” he quoted Kim as asking. In other words, according to Chung, the troops needn’t necessarily go.

A senior South Korean diplomat says that Seoul well understands the nervousness in Washington that surrounds nearly everything that Donald Trump does; that it would be “much easier” to go back to containment and deterrence when it comes to the North, and not reach for “a big deal.” Officials there get the Washington consensus on Kim: Like his father, he’s simply buying time and hoping to gain some economic benefits while pretending to negotiate.

Seoul is banking that wisdom is wrong. And it’s pushing Trump to do what he claims to do best: make a deal.