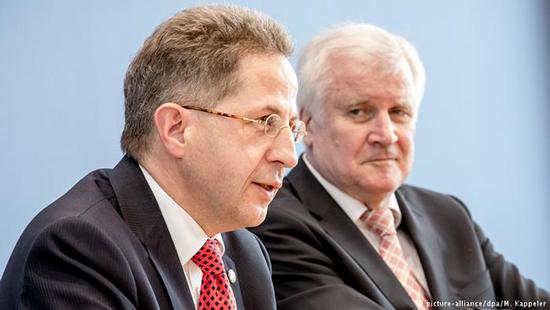 Ending an impasse in Angela Merkel’s coalition, Hans-Georg Maassen is changing jobs. The move is a compromise between Social Democrats, who demanded his removal, and conservative Interior Minister Horst Seehofer.

The latest quarrel within Chancellor Angela Merkel’s government about refugee policy has ended with a somewhat surreal compromise. Hans-Georg Maassen, the under-fire head of the domestic intelligence agency — formally known as the “Office for the Protection of the Constitution” (BfV) — will be stripped of his current job but gain a theoretically better one as a deputy head of the Interior Ministry.

The move is a deal between junior coalition partners, the Social Democrats (SPD), who demanded Maassen’s removal, and conservative Interior Minister Horst Seehofer, who had backed the controversial BfV head.

In a statement released late Tuesday afternoon, the German government wrote: “The Office of the President of the Office for the Protection of the Constitution will be re-filled. In future Mr. Maassen will become a state secretary in the Interior Ministry. Interior Minister Horst Seehofer has high regard for Mr. Maassen’s abilities on questions of domestic security, but he will not be responsible for the BfV within the ministry.”

With that, Maassen has moved up to the status of deputy minister, but has been stripped of all association with the BfV. Controversy around the 55-year-old has been building for weeks after he publicly doubted the authenticity of a video depicting what seemed to be angry right-wing protesters chasing a man they thought to be foreign through the streets while shouting xenophobic slogans. Maassen offered no evidence for his skepticism about the video’s provenance.

Maassen was also criticized for sharing sensitive information about security priorities with the right-wing populist Alternative for Germany (AfD) party.

Saving face on all sides

On Monday, reports emerged that Merkel had decided to bow to SPD demands to remove Maassen, who has been accused several times of harboring sympathy for the far right. Shifting him to the Interior Ministry to a nominally superior and better-paid post is a concession to Seehofer, who is readying the CSU for Bavarian state elections next month.

The wrangling over Maassen’s future is the latest in a series of conflicts over migrant policy within the coalition, mainly pitting Merkel against Seehofer. This summer, Seehofer brought Merkel’s government close to collapse by insisting on Bavaria’s right to independently deport rejected asylum-seekers, in breach of EU rules and German national policy. A crisis was only averted when Seehofer climbed down.

Seehofer had been quoted as saying that if Maassen had to go, so would he. Tuesday’s compromise allows him to stay on as interior minister for the time being. On Wednesday, Seehofer is scheduled to brief the press on the details of the personnel shuffle, including Maassen’s potential successor at the BfV.

Neither Merkel nor Seehofer nor SPD chairwoman Andrea Nahles, who met on Tuesday evening to determine Maassen’s fate, faced reporters after the decision was announced. That was probably a calculated move, as the compromise has been greeted with scorn by opposition politicians and press analysts alike.

“This is an unbelievable fudge,” wrote Green Party parliamentary leader Katrin-Göring Eckardt on Twitter. “Anyone who rewards rather than sanctioning disloyalty and cozying up to the AfD has lost all sense of what’s right and wrong. And the SPD goes along with everything.”

“What qualifies Maassen to be a new deputy in Seehofer’s ministry?” asked the Left Party on Twitter.

“Maassen’s promotion is only a solution on paper,” declared Christian Lindner, chairman of the center-right FDP, on social media. “Either you trust him or you don’t.”

For its part, the AfD has interpreted the efforts within the coalition to remove Maassen as an attempt to stifle criticism of Merkel’s migrant policy, with party co-leader Alice Weidel tweeting “Merkel, not Maassen, should go!” The party is also promoting the hashtag #wirsindmaassen — “we are Maassen.”

Migrant activist groups reacted to Maassen’s lateral move with dismay. The media have largely dismissed the compromise as a move born of political expediency; Die Welt newspaper noted acidly, “The coalition can continue — maybe it will even be able to govern some day.”