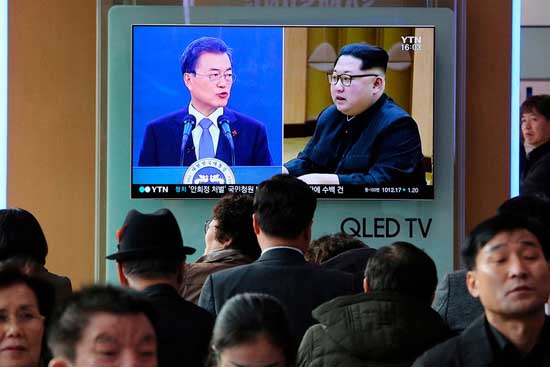 Pyongyang greeted Moon with an official welcome ceremony and the inter-Korean summit seems to be moving along smoothly. Both sides share a strong will to comprehensively improve their relations. If there are no interfering external factors, there seems to be no problem for North and South Korea to establish and consolidate their new relations.

But the reality is not ideal. Moon is regarded as a lobbyist for US President Donald Trump, and the major task of his visit is striving for more North Korean promises of denuclearization. In other words, Moon will spare no efforts to make Pyongyang and Washington resume their talks. US Secretary of State Mike Pompeo canceled his visit to North Korea last month, bringing new uncertainty to the peninsula denuclearization process.

After that, Pyongyang has shown a willingness and capability to prevent the situation worsening. Kim wrote a letter to President Trump. During the military parade to celebrate the 70th founding anniversary of North Korea on September 9, no intercontinental ballistic missile was displayed. This was highly praised by Trump, easing up a bit on US-North Korea tensions.

But this cannot guarantee the peninsula peace process. Pyongyang has expressed its wish for denuclearization and announced a shift of focus to economic development, but it needs the denuclearization process to be safe. The US should give North Korea this sense of safety, taking a more positive attitude on issues such as signing a war-ending declaration. But within the US, many forces are constraining Trump.

If the attitudes of North Korea and the US are variable, the US, as the stronger side, should show more consistency. But the main problem is Washington is doubtful in its interaction with Pyongyang, and the US uses threats as a bargaining chip whenever problems emerge.

South Korea and the US are allies. South Korea depends on the US for security and the US also needs South Korea for its strong presence in East Asia. Moon should play a bigger role in stabilizing Trump’s attitude and this is South Korea’s unique key to a peaceful peninsula.

Although the ties between the two Koreas can break the deadlock, South Korea has no leverage over North Korea. However, Seoul has certain capital to influence or pressure Washington, although that is risky.

North Korea-US negotiations are unpredictable. What’s important is to rationalize the two sides’ attitudes. The situation needs to be controlled when they don’t trust each other.

The peninsula situation made a big leap forward with the suspension of the US-South Korea joint military exercises. This suspension corresponded to North Korea suspending nuclear and missile test activities. It was hard-won progress. Today’s situation was unimaginable a year ago. South Korea should contribute to keeping this situation from being broken.

It is believed Moon’s North Korea visit will be a success, but this success needs to be followed by Washington adjusting its attitude to achieve a more lasting meaning. History has proved that Pyongyang-Washington ties have a decisive effect on inter-Korean relations. In this sense, in the final analysis, Seoul needs to focus on lobbying Washington.