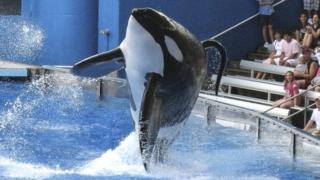 SeaWorld and its former boss have agreed to pay more than $5m to settle claims they misled investors over the impact of documentary film Blackfish.

The firm and James Atchison downplayed the effect on the firm’s reputation and business, the US regulator said.

The 2013 US film was about a performing killer whale at the marine park called Tilikum, and depicted keeping orcas in captivity as cruel and dangerous.

The negative publicity led to a drop in visitor numbers at SeaWorld.

According to the Securities and Exchange Commission, SeaWorld and Mr Atchison made “untrue and misleading statements or omissions” in regulatory filings, earnings releases and calls from December 2013 before acknowledging the effect on attendance on 13 August 2014.

The revelation led to a sharp drop in SeaWorld’s share price – almost a third in one day.

“This case underscores the need for a company to provide investors with timely and accurate information that has an adverse impact on its business,” said Steven Peikin, co-director of the SEC enforcement division.

SeaWorld and Mr Atchison have agreed to pay $4m (£3m) and $1m respectively to settle the claims, but have not admitted or denied the SEC’s findings.

In a statement on behalf of itself and Mr Atchison, SeaWorld said it was pleased to settle, and to continue focusing on customers, rescuing animals and providing “world-class animal care”.

SeaWorld has struggled to reverse the impact from Blackfish, with falling sales and visitor numbers leading it to report a $20m loss for its 2017 financial year.

SeaWorld, which has 12 parks across the US, ended its controversial orca breeding programme in 2016 and has also said it would phase out its live orca shows.