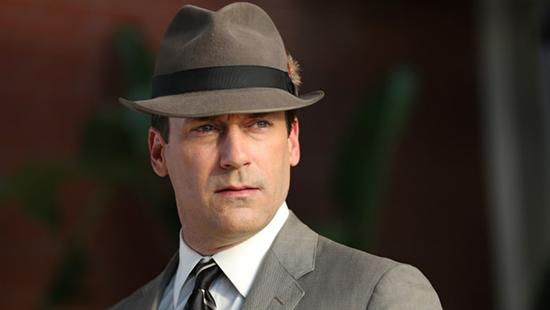 Can you picture Jon Hamm as the new Batman? Jon Hamm can. The former star of Mad Men told the Hollywood Reporter he’d be happy to put his hand up for the role.

It’s perfect casting, really. Hamm, like Batman, lost both his parents before he was an adult. He’s dark; he’s brooding. And when you look at it, Don Draper was really just another incarnation of Batman, the unknowable anti-hero who’s leading a double-life and using women to dull the pain. It’s easy to imagine Hamm playing philanthropist and playboy Bruce Wayne, because the myth of Don Draper is the myth of American success.

It was F. Scott Fitzgerald who said there were no second acts in American lives – and quickly admitted he was wrong. But isn’t the idea of a second life really just another version of a double life? This was something Fitzgerald well understood: he wrote The Great Gatsby, after all – yet another super-wealthy Alpha male with a sinister past and a wounded psyche.

We see that same character again and again in American culture: Tony Soprano and Michael Corleone and James Bond.

There’s just one problem: that character, that idea of a man who lives to work and screw, is becoming obsolete. Feminism and the cultural tide are colluding to pull men back to families. And they couldn’t be happier about it.

It was Facebook chief operating officer Sheryl Sandberg who recommended the Beta Male to women, urging them to marry the nerd. “The things that make the bad boys sexy do not make them good husbands”, is how she put it in her best-selling book, Lean In.

“When it comes time to settle down, find someone who wants an equal partner. Someone who thinks women should be smart, opinionated and ambitious. Someone who values fairness and … wants to do his share in the home.”

Men may still not be doing their fair share of the housework, but they are spending more time with family, especially the kids. According to a survey undertaken in March this year, Australia ranks first in the world for time spent by parents with their children. Another survey found that men now define themselves as primarily as dads, viewing fatherhood as central to their identity.

And we probably have neo-capitalism to thank for that. We are living in an age of income inequality, not just in the US, where it is rampant, but here in Australia, too, where wages remain stagnant and the country’s top property lobbyist is blithely recommending people get two jobs if they can’t pay the rent. The dream, of spending your life working your way up the corporate ladder so you can buy your own home is fading like mist.

Men have seen behind the curtain and understand now that being the hard-working, hard-partying Alpha Male is just a ruse; a Trojan Horse for a patriarchal, capitalistic, unfulfilled and ultimately lonely life.

What’s Batman’s reward for working all day, and fighting crime all night, anyway? Lack of sleep, probably. Maybe some sore muscles; high blood pressure. And for what? So he can go home to the butler? Tell Alfred all his thoughts and feelings? Call up Robin? Robin isn’t a friend – he’s an employee.

See, Superman is an alien, so he can handle the load; fly off the frustration. Talk to his dad’s ghost about how annoying people are. Plus, he gets plenty of accolades for his efforts. But Batman? Batman is working two jobs for no recognition.

That’s not a hero. That’s just an overworked guy in a bad suit.

Natalie Reilly is freelance writer for The Age, The Sydney Morning Herald, Brisbane Times and WAtoday.