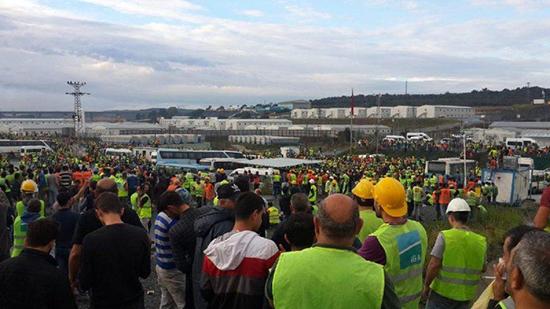 A Turkish court has arrested 24 workers after protests over labor conditions at the construction of Istanbul’s new airport.

The workers were sent to prison after the hearing at Istanbul’s Gaziosmanpaşa Courthouse on Sept. 19 for “damaging public property,” “violating laws on assemblies and rallies,” “resisting police” and “violating freedom to work.”

Some 401 workers were under detention as of Sept. 16, according to Istanbul Govenor Vasip Şahin. Prosecutors had demanded the court to arrest 43 of them, while releasing the rest.

Dozens of workers, who had vowed to continue protests the following day, were detained in police raids at their living quarters near the construction site in the early morning.

They also demanded not to be dismissed from their jobs and that their delayed wages be paid.

In the list, the workers also complained about the container homes at the site where they sleep and bed bugs, which they say have infested their beds.

A statement issued by İGA, the company founded to build Istanbul’s third airport, said the workers were “aggrieved” because they had to wait under the rain on the morning of Sept. 14 as their shuttles arrived late to take them to the construction site.

In February, the Labor Ministry said 27 workers had died on the construction site since 2015, when works began there.