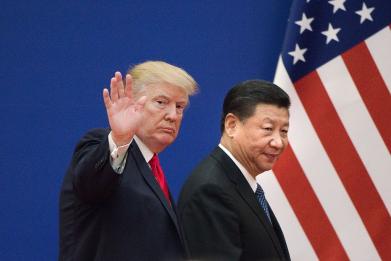 By John Cassidy– The New Yorker

The trade war between the United States and China escalated again on Tuesday, and Wall Street yawned. After Beijing announced that it would retaliate against Donald Trump’s latest barrage of tariffs by imposing duties on another sixty billion dollars’ worth of U.S. goods, the Dow Jones averages rose 184.84 points, and the value of the dollar held steady. On Wednesday, markets around the world rallied.

From one perspective, the nonchalant attitude of investors is understandable. The trade dispute between Washington and Beijing has been rumbling along all year, and it hasn’t had much impact on the rest of the economy. G.D.P. growth and job creation have both been strong. Corporate profits have hit record highs. But the dangers attending the current situation shouldn’t be underestimated. While neither the United States nor China would benefit from a lengthy, all-out trade war, there is little prospect of the dispute being solved anytime soon. And, despite the resilience of the U.S. economy, much of which can be traced to a temporary tax-and-spending stimulus, if the world’s two largest economies do end up in a prolonged dogfight, the calm in the markets will be sorely tested.

The biggest danger is that Trump seems intent on misreading recent history. Last month, Mexico reached a preliminary trade deal with the United States to revise NAFTA. Earlier in the summer, the European Union headed off a clash with the White House by promising to import more U.S. goods and entering negotiations over a broader agreement. Talks with Canada are continuing, and the participants are sending out hopeful signals. Trump’s interpretation of these developments is that bullying works: by threatening to pull out of NAFTA and impose tariffs on European cars and Canadian dairy products, he forced his adversaries to submit. Now he seems to think he can do the same thing to China.

Taking to Twitter on Sunday, he wrote, “Tariffs have put the U.S. in a very strong bargaining position, with Billions of Dollars, and Jobs, flowing into our Country—and yet cost increases have thus far been almost unnoticeable. If countries will not make fair deals with us, they will be ‘Tariffed!’ ” A day later, the White House announced that it was imposing tariffs on two hundred billion dollars’ worth of Chinese-made consumer goods, such as clothing, luggage, and stoves. This was in addition to the tariffs on fifty billion dollars’ worth of Chinese industrial goods that the Administration announced in May.

Clearly, Trump believes that he holds the whip hand, and in arithmetical terms he is right. Because China’s exports to the United States are more than four times the size of U.S. exports to China, Washington has more scope for imposing additional tariffs than Beijing does. After China introduces the levies it announced on Tuesday, it will be running out of U.S. goods to target. Trump is threatening to impose tariffs on another two hundred and sixty-seven billion dollars’ worth of Chinese exports.

But the fact that the U.S. tariffs are bigger than China’s countermeasures doesn’t mean Beijing will buckle. The Trump Administration’s dispute with China is much more fundamental than its disagreements with the E.U., Mexico, or Canada. By making some pretty minor concessions, the Europeans and Mexicans were able to prevent those disagreements from escalating.

China doesn’t have that option. Ultimately, Trump and other trade hawks in the White House want to impose on Beijing a different economic-development model—one that doesn’t include mercantilist practices such as supporting infant industries, trading market access for technical knowledge, and using licensing restrictions and other non-tariff barriers to disadvantage foreign competitors. “This is the time for China to be held accountable for its non-market behavior, for its cheating,” Peter Navarro, the director of the White House Trade Council, told Fox Business, on Tuesday. “Going forward, we can’t have a healthy global economy if one of the biggest economies is basically a predator.”

The Chinese have already made some concessions, lowering the tariffs on cars imported from the United States and expressing a willingness to strengthen intellectual-property rights. But they are loath to capitulate to a White House that they believe is intent on slowing, or even reversing, China’s economic rise. Chinese officials rightly point out that when the United States was industrializing, during the nineteenth century, it used some of the same tactics that China is using now. And as Trump escalates, Beijing seems to be digging in.

At a meeting of the World Economic Forum in Tianjin on Tuesday, Fang Xinghai, the vice-chairman of the China Securities Regulatory Commission, said that even if the Trump Administration imposes tariffs on all of China’s exports to the United States, the Chinese economy is strong enough to withstand the negative impact, which he estimated would be about a 0.7-per-cent drop in G.D.P. “So, we prepare for the worst, and we think the economy will still be fine,” Xinghai said.

Other Chinese officials have hinted that Beijing’s response could go beyond tariffs. Over the weekend, Lou Jiwei, a former minister of finance, suggested that China could hurt U.S. manufacturers by limiting or cutting off the supply of crucial inputs, such as electronic components and auto parts. (American multinational firms like Apple and General Motors could eventually reconfigure their supply chains to get these types of inputs from other countries, but that would still be disruptive.) There have even been suggestions that China could start to sell some of its huge portfolio of U.S. Treasury bonds, although no one in a position of authority has broached this publicly.

Despite the tough talk on both sides, it is still conceivable that some type of accommodation can be reached. The new U.S. tariffs will start out at the relatively modest rate of ten per cent, and they won’t go up to twenty-five per cent until New Year’s Day. That gives some additional time for talks. Right now, though, Trump doesn’t seem very interested in negotiating: he is convinced that the new tariffs, and the threat of more, will rapidly bring the Chinese around. It could just as easily create a prolonged economic conflict the likes of which we haven’t seen before, and the consequences of which are impossible to predict.